building on the foundation of my 1v1 TB Tournament Ranking, I can now present to you the revamped 1v1 NP2 World Rankings! It incorporates an improved (now daily) rating methodology, shows the Glicko Pi Rating and GXE, and offers a new layout including flags* for the players.

The Top 28 players and seven runner-ups or recent winners are shown in the weekly rankings posted below. Players with less than 18% rating reliability (RD above 287) are excluded (inactive).

My VBA code for the calculations is a modification of the Glicko system (link to Dr. Mark Glickman’s paper).

Let me know if you have any feedback, questions, or suggestions for improvements. Also, feel free to discuss the rankings!

*) If you are a former or current NP2 1v1 player and haven’t yet, you can pick any flag from the collection at https://flagicons.lipis.dev/ and send me an according note for it to be shown next to your name. It’s voluntary, but would be highly appreciated!

History of all 1v1 Tournaments (including reference links, numbers in square brackets are ranks as per the start of the tournament) 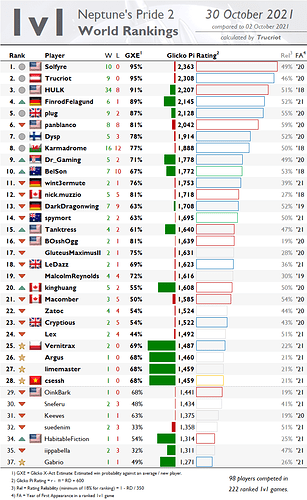 Thanks for all your work on this Rankings Table @Trucriot - nice job.

Thank you @plug! Indeed there’s a lot going on in 2021 - partially due to more participants and matches!

Maybe also a good time to briefly elaborate on the .5-rankings in the tournament history. These are players with a rating below 18% reliability, so technically unranked at the day of the thread opening. In your example, @Solfyre and I were just about to agree on a draw after nearly 4 months of playing our August tournament game - in that long time period, our RD rose above the threshold of 287. If there was no threshold, we would have been ranking between the 9th and 10th ranked players at that time, thus [9.5]. 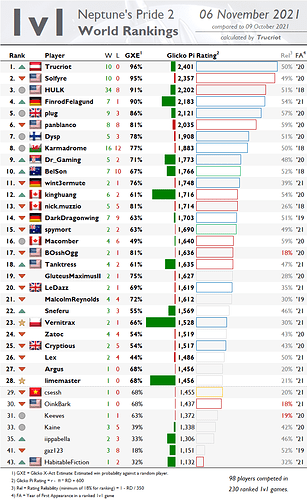 There be so many matches this year compared to last!
Perhaps we could give a team tournament a new go?

Yeah, I’m now sure there will be more official 1v1 games in 2021 than in all previous years combined.

Maybe he’s down for another, or you can also try your hand at it.

I’m afraid I don’t have time to setup/manage a tourney right now, but I hope the rest of y’all have fun!

Perhaps, but I don’t know how these things work

Oh, it’s mostly just opening a thread and replying to it from time to time 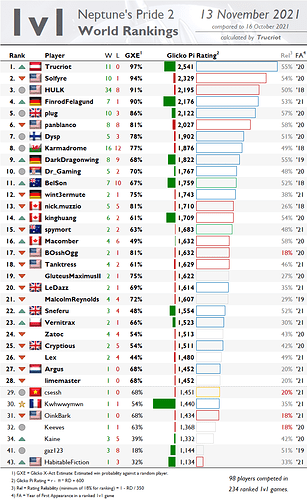 Congratulations to the winners of this week: @DarkDragonwing, @plug, @Kwhwwymwn, and yours truly. 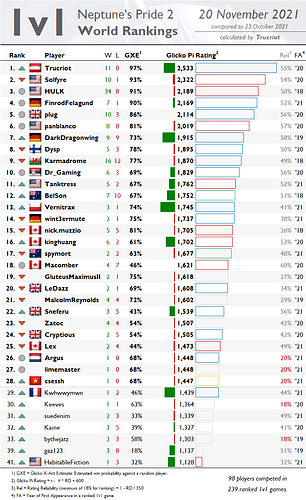 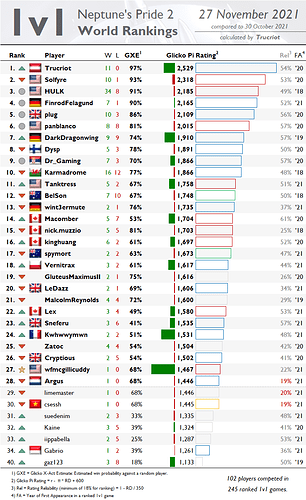 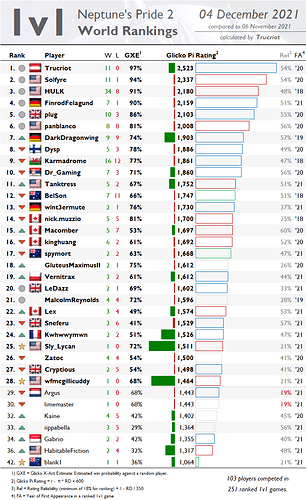 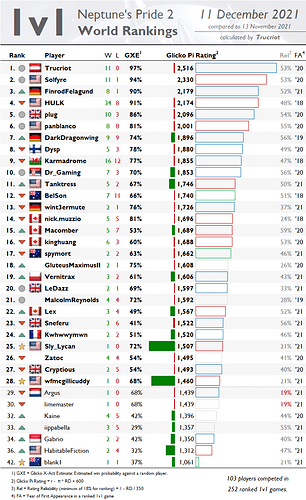 Congratulations to the winner of this week: @FinrodFelagund! 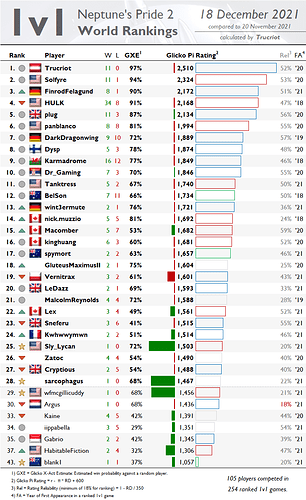 Congratulations to the winners of this week: @sarcophagus and @plug! 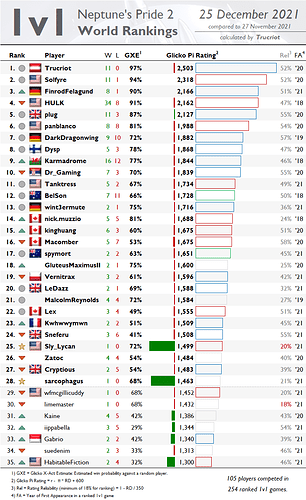 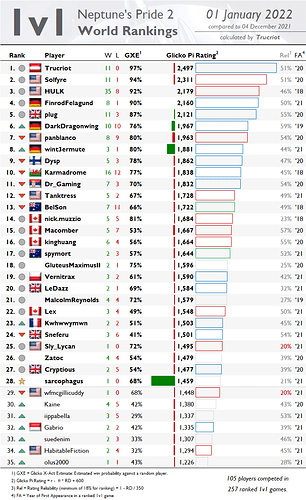 Congratulations to the winners of this week: @wint3ermute, @DarkDragonwing, and @HULK (w/o)!

LOL I’m back up to 3rd place - sorry @FinrodFelagund …

BTW, everything should give @Trucriot a huge tip-of-the-hat for all his work with 1v1’s which is why there is a big jump in the 2021 numbers. Now someone just needs to defeat him in a 1v1!