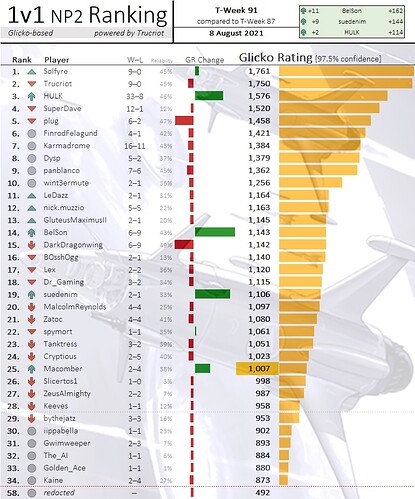 @BelSon gets a boost and rises to 14th place and 1,143 points with a victory in both his and his opponent’s 15th 1v1 game. A draw between @Macomber and @spymort (the first draw after Solfyre v Trucriot in the August 2020 tournament) gives both some points due to reliability gains - the former breaks the 1,000 point barrier for the first time in their career. 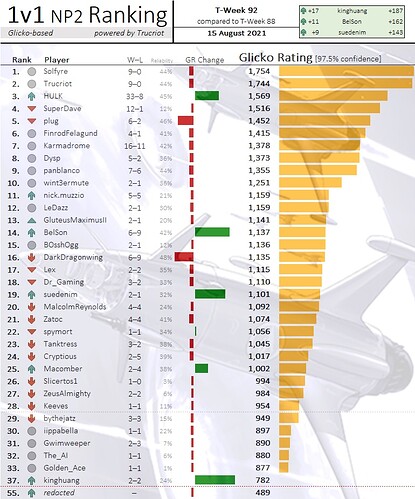 @kinghuang’s recent win in the LLL nearly managed to fly under my radar, but here’s the updated ranking now with him jumping to 37th place (782 points)

How does the “six recent winners and/or the runner-ups” section work? It might be the language barrier but this explanation alone is not enough for me. How are those people chosen exactly?

And if I’m already asking questions: What do the arrows mean? I presume they are related to ranking or points but I don’t see how. And what’s with the bars? I think they represent a change in points, but across what time?

Thanks for your interest

How does the “ six recent winners and/or the runner-ups ” section work? It might be the language barrier but this explanation alone is not enough for me. How are those people chosen exactly?

Basically, if there is someone who rose in points in the timeframe of comparison but doesn’t make it to the Top28, they get a spot in this 6-people-section - the rest is filled up with runner-ups to the Top28.

What do the arrows mean? I presume they are related to ranking or points but I don’t see how. And what’s with the bars? I think they represent a change in points, but across what time?

The timeframe of comparison currently is 4 tournament weeks - see “T-Week 92 compared to T-Week 88” at the top of the last ranking. The second column is referring to ranking changes in this time period. Arrows mean 2+ rank change. And you’re correct, the bars represent a change in points, relative to the maximum positive and negative change by a player in that period. 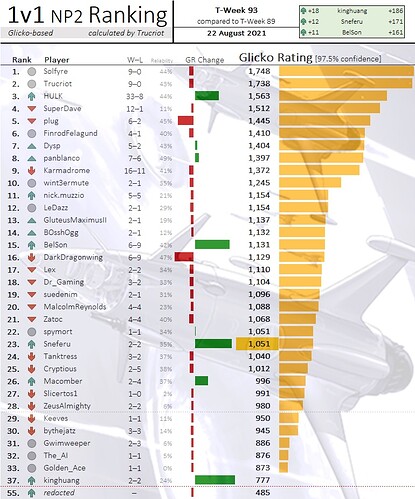 @Dysp and @panblanco’s draw as well as @Sneferu’s fast-paced LLL win last week are now included in the ranking which has the latter player rising to a career high of 1,051 points. 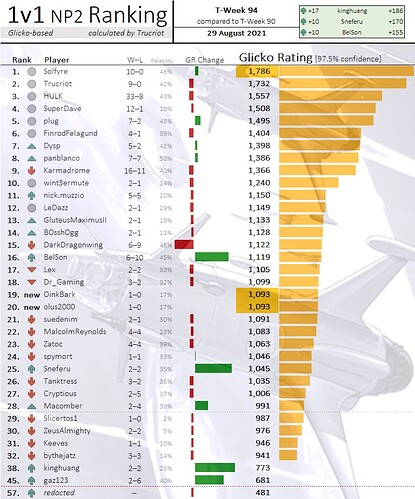 In the busiest tournament week since May, @Solfyre sets a new personal record with his 10th win, solidifying his lead at 1,786 points. @plug is making solid progress too with his 7th victory (1,495 points).

@OinkBark and @olus2000 managed to win their first 1v1 tournament games and directly enter the Top20 with 1,093 points. And after a few losses, @gaz123 is switching back onto the winning lane, gaining 170 points compared to last week!

Looking forward to the next round! 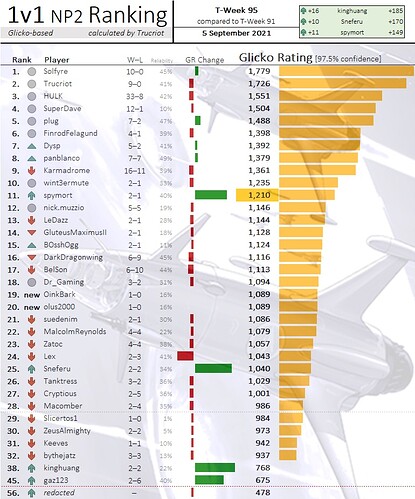 Winning a game in the Legendary Level League, @spymort (1,210 points) is knocking at the door to the Top10 now!

I like it, but for those who aren’t aware, that reliability is for the rating, not the player 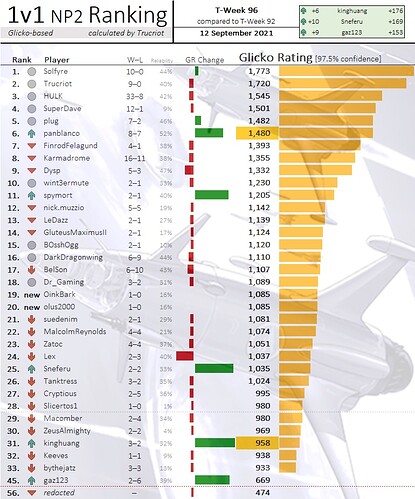 Two players achieve new career highs this week: @panblanco is causing a rumble in the Top10 as he lands just two points shy of the Top5 at 1,480 points. On the other hand, @kinghuang is getting close to breaking into the Top28 (just 22 points away at 958 points). 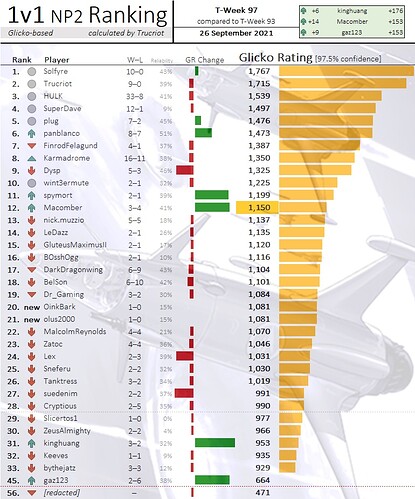 To resolve some of the limitations with the current calculation methodology, I may change it from a tournament week to a calendar day approach sometime.

Would it not be feasible to just have every LLL round as a rating period? Would be so much easier, since you can only play one game every round right? Or am I missing something completely that makes this impossible?

That was actually my original methodology before I even started the LLL. What you’re missing is mainly that the LLL rounds aren’t the only official 1v1 tournament games. There’s also the classic 1v1 KO tournaments (two of which are still running with yours truly struggling). Games within a 1v1 round can vary wildly in finishing times, many months sometimes. Even within the LLL it’s not great that you would have to wait for up to two months to get your updated ranking, especially if the ranking is used for seeding in the meantime.

Actually saw that, but to keep things simple and consistent the whole ranking calculation currently follows a round-based approach, meaning games are only considered once a tournament round is fully finished (or its end is in sight).

While keeping games bundled that “belong” to each other, it comes with certain drawbacks, most importantly some finished games waiting in the backlog. This problem has become somewhat more prevalent now due to bigger and parallel tournaments and vast differences in bracket pace.

Your reply made me think some more about that and alternatives. I may switch the whole thing to a week-based approach as I’d like the steady time component, but need to look into my code first as I’ve written it quite some time ago.

Ah ok, fair. I based my system (in another game) based on tournament rounds, but matches don’t last 2 months lol, it takes 1-2 hours at a specific time. Also would love to see the current ratings without the downwards confidence at some point, since that is the actual skill level of someone with a small enough rating deviation.

I bet you get more data (more games played) with short games like that too, I’m envious haha.

Also would love to see the current ratings without the downwards confidence at some point, since that is the actual skill level of someone with a small enough rating deviation.

I gave a glimpse in two posts here (highscores though):

I think the downwards confidence is especially important with newer players, and it also encourages staying active instead of resting on your laurels.

I get too much data! The rating deviation drops to below 100 in only 2 matches if I just took the results of the game directly lol. I have to resort to doing some weird stuff with the rating deviation to have some acceptable numbers. My main change is modifying the expected win ratio so that it had a floor and ceiling. The world’s best player against the world’s worst player will (arbitrarily I admit) win “only” 85% of their games, instead of 100%, the reason for that is because the game has some tinge of luck into it, so if I don’t do that, players are just simply not encouraged to play players below them in the rating pool, so they would actively try and avoid it.

I’ll change the system a little when I have a bit more data, so that the 85% isn’t as arbitrary.

What’s the level of the worst player compared to the ai ?
If we assume the ai (playing alone) is the worst player, there is a fast and easy way to find the actual win rate : asking the best players to make hundreds of 1v1 against the ai

For NP2 1v1s, I would expect any player (if it’s not their first game ever) to achieve a 100% win-rate against AIs (starting from Tick 0) even when playing hundreds of 1v1s.