Update - the new ranking with tournament week (T-Week) methodology is live now, including all 116 tournament games that have concluded since 2018. Rank and rating changes are measured on the last 28 days to get a better picture of trends (sometimes a T-Week only has one game).

With two victories each, December has been the month of @panblanco and @GluteusMaximusII - the former rose by 305 points and 16 positions in the ranking to a personal career high of 1,101 points, while the latter jumped straight into the Top5 with their first two games, leading to a rating of 1,316 points. @DarkDragonwing scored their second victory in a row and rose to over 1,000 rating points for the first time in their career.

Several new faces joined the December tournament and put themselves on the map - or more specifically into the Top25 of the ranking: @Cryptious, @Keeves, @Dr_Gaming, @plug and @kinghuang already moved on to the second round.

@Dysp is also new in the Top10 as one of their won games waited in the backlog with the previous methodology, the inclusion of which helps them to an impressive 1,284 rating points at the moment.

I would love to be able to see a list of the ranking, maybe a webpage or a simple google doc?
I’d be happy to help setting something up if you’d like

Sounds good to me! Right now the full list just sits in an xlsb file, just hit me up with any idea or variant to share it effortlessly.

At the top of the thread I only display the top half of the ranking - I don’t want to discourage anyone from playing again just because of a “bad” rating which can change quickly anyways as a little streak of bad luck or minor mistakes is hardly telling about future success in 1v1s (see rating reliability).

I didn’t see the first post, that’s actually good enough for me! Thank you
Will still look at what you share about the algo to get the ranking as it got me curious

Definitely check out the short paper by Mark Glickman I largely based my code on if it interests you.

Last week only one game concluded, but that one saw @plug soaring to 4th place and 1,370 points as they were victorious over the #2 seed of the December tournament.

Seven official 1v1 games are currently ongoing, and more are to come soon with the start of the Legendary Level League. Check it out and consider signing up if you haven’t already.

Four more games officially concluded this week. One of them will only be considered in next week’s ranking (due to limitations mentioned above).

@HULK achieved their incredible 30th 1v1 tournament victory and is on a win streak of 11 games. The last loss was against @SuperDave in September 2019. Will Hulk be able to keep the SMASHES coming even with more and more challengers entering the 1v1 arena?

I myself am happy enough with a new career high and being ranked 6. @Zatoc won a 1v1 game for the first time and jumped to 894 points in the meantime. And @kinghuang is the third in the club of career highs this week as their reduced RD made up for the minor losses in r - because as per above, being smashed by the Hulk is rarely telling about one’s true 1v1 strength.

Great job @Trucriot keeping this going and running another tournament.

FYI that my winning streak is almost certainly going to get SMASHED by @panblanco as he made some GREAT moves in this game. While I’m up in Star Count, that is misleading because he’s got me seriously on the ropes.

A busy tournament week has come to an end and 5 more games are included in the ranking now.
Furthermore, two victories by @Solfyre are still pending, so we can expect him to climb further above his new career high of 1,253 points

The skill density visibly got higher (see OP), with the top duo @HULK and @SuperDave now figuratively being chased by a pack of 11 players in the 1,218 to 1,417 points range. “Leader of that pack” is now @Dysp who is only the fifth player to get a spot in the Top3 in the past 53 (!) tournament weeks. @panblanco joins the chase party with another victory too, while @ignaloidas (1,093 points) and @SimonMiaou (980 points) can celebrate their first tournament win.

Score another for @panblanco who just SMASHED the HULK in the December tournament!

Also congrats @HULK for the win streak record (11), that’s more wins than most players’ total games. Can’t really see anyone beating that soon (or ever?)

Congrats to my NP pal @panblanco

Hey, so now that I’ve been destroyed in my first tourney, how does the tourney participant badge work? Will that just show up later?

As far as I know, no badges for tournament wins or participation have been handed out recently. It’s probably a manual process on Jay’s side, maybe @HULK knows more.

Tournament organizers need to contact me with details. Via email preferably. 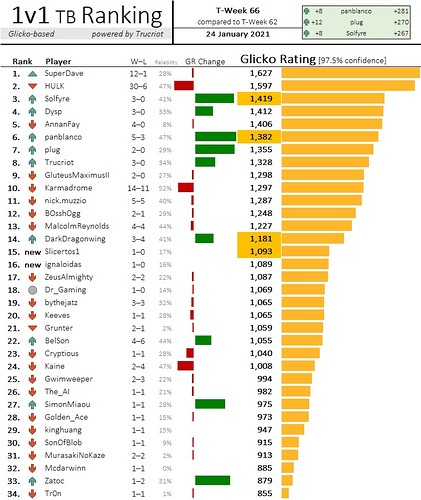 68 unique players are ranked as of the latest completed tournament week, the top half is shown above. A golden background of a player’s rating means that the player is currently at their personal career high.

Five new games are wrapped up in this latest edition of the 1v1 ranking - from four different tournaments!

@Solfyre’s win in the semifinals of the August tournament catapults him to third place and 1,419 points - and he still has one more victory in queue! Can he become the first in years to break the hegemony of the top duo?

@DarkDragonwing grinded out a win in the August 2CC semifinals, lifting him to 1,181 points. And new-joiner @Slicertos1 now ranks just below him at 15, winning his game in the first round of the LLL.

Btw, thanks @JayKyburz for checking in!

Good job everyone for raising the bar and especially @panblanco for SMASHING the HULK!

FYI that I’m working with @Trucriot to figure out a “good” way to award tournament badges for those players who compete - we’ll use his records from previous plays… I’m traveling right now, but will try to present a proposal to @JayKyburz for his consideration in the next week.

I’m debating if it should be called the “1v1” or “mano-mano” badge!

Officially won over with turn based NP. Actually pretty good. Looking forward to the next one. And lol at superdave losing a game. What a noob

Hey @Trucriot, how does this thing decide when to add game wins/losses into the formula? I think I had 3 games end in the same “week” (10-17th), but it seems to be that they are getting considered at very different times for the ranking. I’m just curious about when a game is “over” and put into the rankings. Thanks!

I’m with you @Slicertos1 with being won over by TB games, specifically the 1v1s. There is sometimes more tactical strategy in one turn of these matches than say a whole standard NP game. Other games are SO MUCH MORE dependent on star spacing, start location, player tactics and diplomacy. I’ve been finding that regular games don’t really cut it for me anymore, like something is missing.