The last 1v1 tournament was in October … so figured that especially with people staying at home due to the coronavirus, it’s time for some more mano-mano carnage!

UPDATE:Here’s the tournament brackets that will be updated as play progresses. 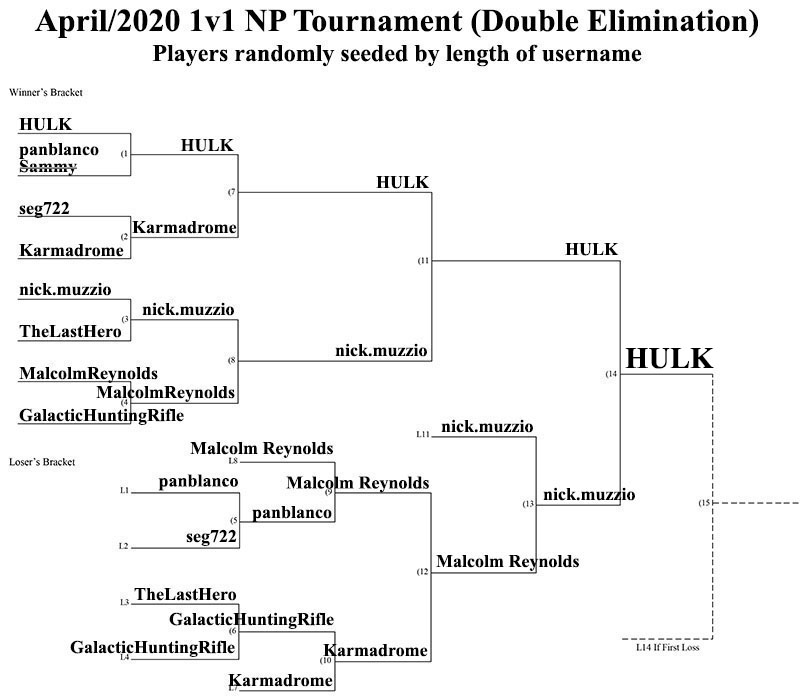 Similar setup as before with the following mods from default params:
Interesting suggestion from Solfyre to make Banking Cheap and therefore more balanced …
Weapons start at Level3 and are LOCKED (whoever gets W4 first has a too-big-of advantage)
Experimentation is LOCKED at Level1 and Manufacturing is Expensive to Research
Cheap Science (this seems to work well and provide some balance to an Indy-fest)
EPIC (64 stars/player) Galaxy with Far Distances
HomeStar is 20/20/4 rather than 5/5/1
Starting Cash is $2,000 (don’t spend it all at once, but lots of carriers to expand is recommended)
You start with ONE star that has 100 ships
The Map is MIRRORED … so you each have IDENTICAL starting positions.
Real-time games favor those who are willing to forgo sleep, so the play is turn-based SIX ticks/turn … although if Jay enables smaller ticks per this thread, we may try 3 ticks/turn.

Since this is an EPIC map, it will take a while to play out … please do NOT sign up if you can’t commit to AT LEAST a move/day … ideally a couple/day to keep things moving along. Note that you are allowed 48 hours to submit which is to take care of the (hopefully very rare) situation where something comes up in RL and you can’t submit in a day. Since it is 1v1, there is no diplomacy (except razzing your opponent!) and with turn-based, if you are the 2nd person to submit (and advance the turn), then please try to make your subsequent moves and hit that SUBMIT button!

Note that you do NOT need to be a premium NP player to participate … but if you have a “free” account, you are limited to 2 games at a time … so please don’t sign up for the 1v1 tournament if you can’t keep an open slot. Or better yet, consider signing up for premium and toss Jay a few bucks for a great game!

Hopefully we can keep things moving along so people aren’t delayed, but (assuming players start at about the same time), lets try to keep it to one month for any game/round but if everyone else finishes, then you have a week (and at least 2 cycles) to finish. Winner decided by most stars with tiebreaker being most ships. Stalling to win by time is lame (in NP and any sport), so please don’t abuse the time limits. Most of the tournament games finished in 2 weeks, so hopefully we can move along at a similar pace. I just don’t want people to have to wait around too long and lose interest.

If “something” comes up, the Tournament Director (that would be the Jolly Green Giant aka the Rule-Meister!) will attempt to make the fairest decision that benefits the most people. Sorry for all the fine-print legalese!

Please reply here in this thread if you’d like to join in on the carnage (and can commit to keep the games moving along) and I’ll setup the tournament! Per thread below, I’m going to cap it at eight … since powers-of-two makes a perfect bracket.

We are going to play double elimination - I’ll pick some random method of doing the pairings and setup the games - will post when those are ready (might be a day). Players are:
@HULK - @MalcolmReynolds - @Karmadrome - @nick.muzzio - @TheLastHero - @seg722 - @GalacticHuntingRifle - @Sammy

@panblanco is first “sub” (in case anyone has to bail) and he (and anyone else who wants to chime in) will have priority for the next tournament.
UPDATE: @Sammy was already in two games, so @panblanco took his place after the tourney started.

Well, better try this out.
First time 1v1.
Hope I can give some resistance if not then at least learn some sneaky and cleaver moves.

I’m intrigued… count me in!

I am new to the game, and I haven’t finished a full game yet. This sounds fun so count me in.

Happy to sign you up @Sammy … but just be aware that there are some grizzled veterans in the tournament … so if you are “new to NP”, it might be brutal for 'ya.

Again, you are welcome to play - just want to make sure you know what you are getting into!

Thanks for the warning. I hope I will put up a tiny bit of a challenge for them.

Sounds good @Sammy - just want to make sure you know what you are getting into.
Good luck kicking some A** … except against the Jolly Green Giant!

So we have eight players signed up:
@HULK - @MalcolmReynolds - @Karmadrome - @nick.muzzio - @TheLastHero - @seg722 - @GalacticHuntingRifle - @Sammy
Which is a nice even number for a tournament - should we just cap it there and start?

And if so, do you guys prefer single or double elimination?

Personally I would always prefer to have bigger tournaments if possible and willing to wait. But fine with starting soonish.

@Sammy then we are almost two. So let us bleed and get slaughtered together.

I vote we wait a bit longer and see if we can get more to sign up. I’ll advertise in some of the big games I’m in

I’m fine with starting whenever, or waiting. Not going anywhere anytime soon these days

Single elimination would be preferred otherwise I feel the tournament would go on for quite some time.

Double Elimination means if you lose a match, you get more chances to play … I especially like doing this to give people new to the format a chance to play more.

These games can really go quick (I’ve seen 'em done in a couple of days) since there is no diplomacy and if you are last to submit, you then make your moves and submit … so it’s two turns every time. Plus people are at home a lot more these days.

So I’m thinking we go with the eight we have now … and if more sign up, we can consider another tourney.

That works with me. Overflow goes to a new tournament that starts after this first one ends.

Id like to join… if you are willing to wait for even numbers.

I appreciate your interest @panblanco, but having “Powers-of-2” makes for a perfect bracket. So I’ll put you down as the first “sub” (in case anyone has to bail) and you’ll have priority when I do the next tournament.