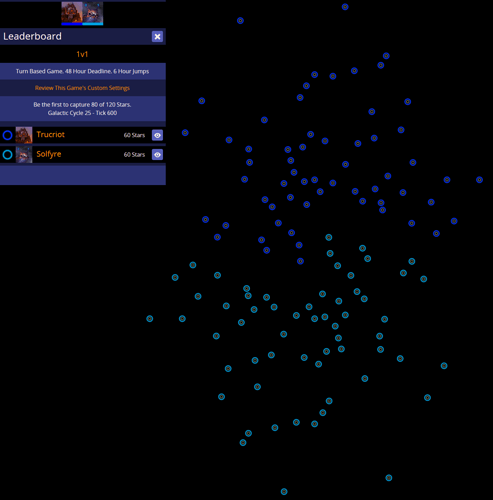 Lol, they probably need a new map… looks like the victor of this game would be whoever has the best stamina.

LOL
The gap between them seems to be too big. With fixed Weapons 3 nobody will start an attack on Tick 600. I guess there are thousands of ships on their borders facing each other. Attacking first would be a suicide move…

It was hard on my last game with @panblanco with a gap of 8-10h between us on almost every star. But THIS seems to be even harder to find a way of attacking.

Without giving too much away, a small glimpse into what’s happening (also wanted to share that random but perfect 10000 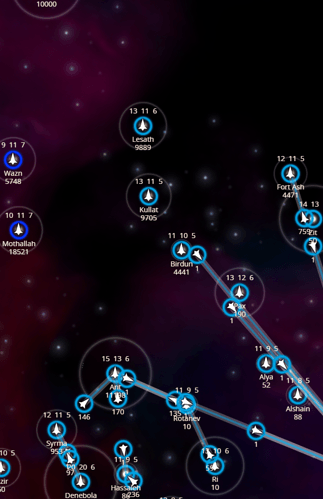 When we no longer see any possibility of one of us gaining the upper hand, we’ll call it a draw.

Thanks for the sneak peak … one (both?) of you need to light up some borders stars, rush some ships in there, and put on the HULK SMASH!

Although yea, with the distances, that might be suicide … been there - done that many times!

Sorry this turned into such a slog for 'ya - I thought it looked like a good map … and if you guys had picked different routes to attack, it might be a wild slugfest with mutual advances on different parts of the map … but appears that both wily veteran players picked a similar optimized strategy, so you are semi-stalemated.

Again, happy to re-generate a new map for you guys when/if you are ready.

While this one wraps up, lets start a new 1v1 Tournament … sign up here! 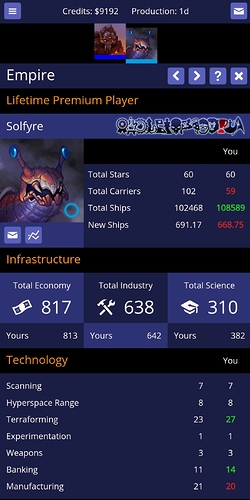 We’ve decided to officially call it a draw. Still a good ongoing pace, but it’s been 3.5 months now.

I told @Solfyre in September that I’d let him move on to the next round if the game ends in a draw - now the time has come, so @Karmadrome vs Solfyre is up next

It’s sad that after all the optimizations and strategics this game does not get a worthy conclusion, but it was super intense and characterized by great defensive maneuvers on both sides. There was a particular point where I thought I had him, just to see Solfyre masterfully scraping together just enough ships via a route I had not considered.

A 1v1 game of such epic proportions (ticks and ships) will likely never be seen again (especially with the tiebreaker introduction). Thanks Solfyre for keeping it captivating throughout!

GREAT game @Solfyre and @Trucriot - 660 ticks and still stalemated … that will certainly go down as a legendary game!

@Karmadrome and @Solfyre: I presume you are ready for your game.
If you guys mutually agree, I can now create a map with Exp=ZERO … would you prefer that?

I’ve been ready for 3 months

I don’t mind either way on the exp setting

I don’t mind either

Just took a peek at tick #78 - nice work moving the game along guys.

@Solfyre has jumped out to a 64-54 lead … due to a nice incursion over on the left flank … but I do see a isolated star owned by @Karmadrome on the right side that could certainly create some havoc.

Hope the game map itself is playing well for you guys.

Good map so far with lots of options for attack plans. I have a bunch more stars, but we’ll see if it counts for anything as most of the ones I’ve nabbed in Karma’s territory are pretty lousy.

The map appears to be playing out quite well with hotly contested stars in the middle changing hands.