Someone declared war on my and our ships clashed the very next tick even though it still shows the alliance hasn’t formally ended yet on his profile. 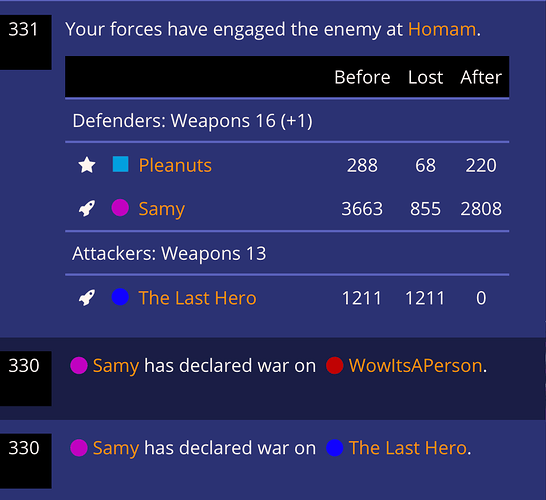 Hrm, weird, must have something to do with the three way battle.

Is Pleanuts at war with the Last Last Hero?

Yes I was at war with Pleanuts already. Samy’s ships were on Pleanut’s star Homam. I expected would kill Pleanut and take control of the star with Samy’s ships housed as friendly until the alliance expired.

Err, I think that’s how it always works, if you attack Pleanuts star when you are at war with them, and he is allied with Samy, Samy will help defend regardless if you are at war on not with them.

There is no such thing as being a neutral third party at a battle for a star.

Am I reading that right? its early here.

Ok, that makes sense. So then does it make a difference that he declared war with me before the ships hit? Or would I have still clashed with Samy if we were still allied when the ships hit.

If the first battle ended with Pleanuts defeat, then (I am not sure, it might be?) the largest fleet owns to defend the star, and since Samy is FA to you, then there would be no second battle.

These should all be true, and nothing should be different or changed when Samy declared war, except there is count down timer running to cancel FA.

Sorry to Necro, but yes I had a FA with Pleanuts. Hero and Pleanuts were at war. My ships were stationed on the star before war was declared. This comment is just to provide clarification.