Congrats @Solfyre (and @Dysp) for advancing to round #3.
Yes, please join your games (@plug also) per the first post or at @Dysp’s EXCELLENT Tournament Tracker.

@panblanco and I are several cycles into our game. I made a lucky HULK SMASH against him and was feeling pretty good about the game … but then he did an awesome SMASH THE HULK Warp Gate move that has really tipped the scales. While I’m ahead in Star Count, that is misleading as he has me on the ropes.

This would be a really good time for the HULK to get REALLY REALLY ANGRY to have any chance of winning this one!

Thanks for the nudge @HULK - I’m safely joined and will await an opponent.

Oh hey, congrats man! Sorry, I wasn’t expecting that one to wrap so fast. I’ll try to get on this later today.

Sorry, got smoked with IRL stuff. Gonna get that first move in as soon as I can. Really appreciate the patience.

I’m in. This map’s gonna have some really interesting strategic choices to make.

Have fun @Solfyre and @GluteusMaximusII … I actually generate a lot more maps than you actually see, because I try to make sure it’s really “good”, especially in the later rounds of the tournament. An FYI to all that if you don’t think you map is “good”, let me know (before you start play) and we can discuss generating a new one for 'ya. A reminder to @Trucriot to please join your game against @Dysp

I can relate @GluteusMaximusII about getting “smoked with IRL stuff” … as that is happening to me the last week and for at least a couple more days. To make matter worse, @panblanco is smoking me in our game. I’ve been making some desperate moves which have had minimal effect due to his expert play … and LOL I just spent my Economy cash one turn early … so this might be a sign it’s time for me to concede - D’OH!

Yup, will join the game soon. Trying to get the other game against Dysp out of the starting phase first so I don’t get anything twisted. Can’t really afford that if I want to have any chance against Mr. 7-to-nil

Lol, will be crazy and tough games for sure.

I’ve conceded to Solfyre. He made some excellent early moves, and a couple gambles I made didn’t quite pay off. I made a few key mistakes in the last few turns, and he has an irrevocable advantage at this point, so no sense dragging things out longer. It was a fast game, and very well played on his part. Great map.

I hear 'ya @GluteusMaximusII as I’m in a similar position with my game against @panblanco - I got Hyper4 a couple of turns ago that allows me to reach two more stars … but just realized I didn’t move my carriers - D’OH! Plus @panblanco is putting the HULK SMASH on the Jolly Green Giant!

I’ve updated the first post - congrats @Solfyre for being the first to advance to the semi-finals … and per my post in the August tournament thread, we have a FINALS game pending there - will touch base in a week when I get back from my travel.

@DarkDragonwing and @Dr_Gaming - I implied above, I relate to RL getting in the way of NP, so do your best to keep submitting … @plug is waiting for 'ya.

Ditto for you too @Trucriot for your game against @Dysp.

I’ve conceded my game to @panblanco - congrats on a SMASHING the HULK and advancing to the 4th round.

Nice game so far between me and @Dr_Gaming.
We are at Tick 168 right now and I am leading 77-57 ATM. Due to my leading in stars I managed to also take the lead in techs and stats. He was trying to get some of my stars in the first few cycles with some bold moves, but I was lucky that I had sent my ships to the right places just in time. That has costed him some ships and I was able to take some of his stars after that…
But now it’s kind of a stand-off. Will not be easy to take the win! 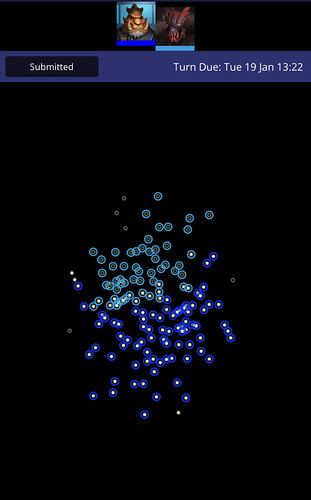 Woo, can‘t remember having seen @HULK conceding a game. Must have been a tough match. Congrats @panblanco!

No rush - this is a game that rewards patience sometimes.

Still doing the best to win the game, @plug

NP2STATS is showing that @Dr_Gaming has missed three turns … so I’m guessing that RL has gotten super busy for 'ya. Also, @DarkDragonwing has what looks like an overwhelming lead on 'ya … so it’s just a matter of time before he wins.

So in the interests of moving the tournament along, I’m going to provisionally declare @DarkDragonwing the winner and he’ll go against @plug in this round #3 game.

However, if @Dr_Gaming is able to somehow pull out a victory, we’ll adjust things. I hope that is fair and reasonable for all.

Took a quick peek at the map for @plug and @DarkDragonwing… I’d be worried about it being a tough one to get over the hump in the middle. A possible stalemate situation. Have a good look at it before you guys commit as you’re the ones playing it!

Excited for you guys to get your game on. I’ll be eagerly awaiting the victor!

I had a side-bar discussion with @plug and @DarkDragonwing and they both seemed amenable to playing that map … so unless you guys want to try something else, I’m OK with 'ya giving this a shot.

It’s hard to know how a map is going to play out - check out this game between @Solfyre and I where I thought we might end up with a DMZ across the center of the map … instead, it is shaping up to be a diagonal!

FYI to all that @Solfyre and I have been chatting about a “stalemate” rule … I was thinking maybe if at 500 ticks, both sides had exactly the same number of stars, a stalemate can be declared and restart another map.

I’m happy to give it a go and see what happens. As you say @HULK - if it’s a genuine stalemate we can re-start.