I really enjoy playing the 1v1 tournament matches. So I was thinking it would be fun to organize a League system. This would takes some time to finish depending on how many players are interested in joining. My thought is that this could go on for several months, maybe in to the next year. I attached a suggestion on how it would work with this post. Feel free to comment!

What I need som help with is designing maps since I don’t now how to do that. I think we should use the settings used in the August 1v1 tournament.

So, is there any interest for this kind of play in the NP community? 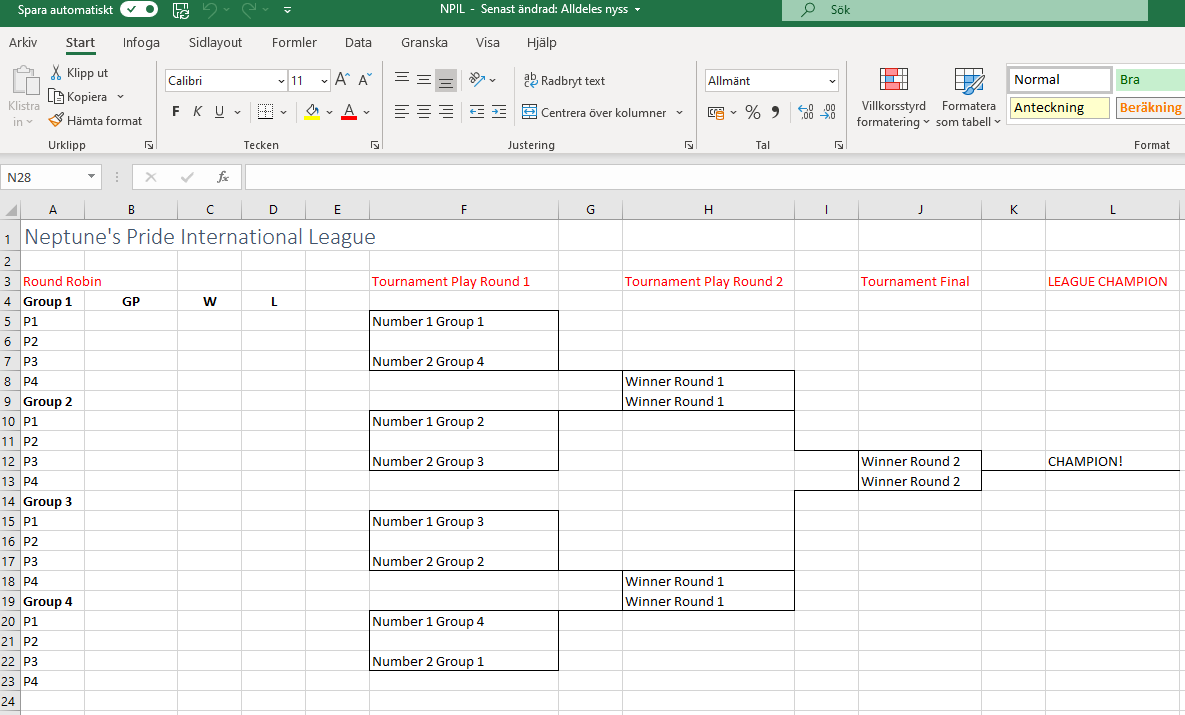 Appreciate the engagement and very much like the idea of more 1v1 games instead of immediate KOs.

I wouldn’t call what you’re showing in the screenshot a league system yet though (for that I’d see more players per group), more like a tournament with a group phase - which is exactly what I’m planning to do in September with a slightly different structure than shown above.

I think a league system would be great to have a more constant stream of games and also more accurate ratings for players, however I’m not sure we can rely on all players staying engaged over months - and if one drops off, the league is in trouble.

Let’s see what the rest of the community thinks.

Btw, have never seen these words in an Excel menu before

Yes, it would be more of a league system if there were more players. Just showing this as an example and based on a somewhat realistic estimate on how many players that would show interest. As you say, with a higher number of players the higher the risk for people dropping out.

What structure are you planning?

The words in the menu are in swedish.

You could also do the round robin as a double, so everyone plays everyone two times. Maybe a solution for a more prolonged gameplay if there are few players.

You could set it up like king of the hill. Winners move up losers move down. Since you already have a ranking system it wouldnt be tough to organize.

If someone drops out the format continues and that match just counts as a win for their opponent.

We can have a longer sign-up period and afterwards the initial ladder will be set up according to each participant’s latest rank. Unrated players will join at the bottom of the ladder. After round 1, the ladder will “live” on its own regardless of the latest ratings. This should make for some very intense games that are very close as players will more likely play other players of similar strength to theirs.

If we keep it at one round a month, it will be much more relaxed time-wise than the tournaments (which can still go on) - more people may sign up - and the king of the hill can keep their title for at least a month. Plus, players only have to commit to one game at a time. We may even consider to set the games up with lower star counts (32 instead of 64 per player) to make it relatively certain that they can conclude within a month.

The only thing I’m not too sure about is just keeping drop-outs in the system, it may take a while if high-ups drop out until they are flushed out of the system. For one game, okay, but then the ladder should move up accordingly if they don’t come back for the second month in a row (keeping in mind that unplayed matches won’t count for the ratings).

@Axson. If we get 24 players to sign up (for the first time!), there will be 8 groups of 3 who do a round robin. It’s better to have groups of 3 as we don’t have tiebreakers, and with 3 people in one group there will be a clear first, second and third place based on victories alone.

So people will play two games at first and the best 16 will move on to the KO phase - similar to your structure outlined above (place 1 vs place 2, people from the same group can only meet in the finale).

It’s better to have groups of 3 as we don’t have tiebreakers, and with 3 people in one group there will be a clear first, second and third place based on victories alone.

Is the Glicko system able to account for rock-paper-scissors sort of 3-way victory scores among three players ? Where player A wins against player B, and player B wins over player C, while player C defeats player A ?

@xjhdexter. Oof, I don’t really know how I didn’t consider that case. Groups will be based on player’s Glicko rankings, so the expectation would be that there’s gonna be different levels of strength within a group and one favorite. Given that Player A didn’t uphold the favorite status if he only gets one victory, I suppose he would be out and the surprise winner gets the group win. But open to different suggestions for tiebreakers

I would also assign the top 8 players to the groups in a way that if they all win their group and go on to win as per rating, #1 and #2 will only meet in the finale etc.

Interesting ideas you got there! Good to get this discussion going.

I’ve made some changes in my initial layout. Will be more of a classic league system where all 16 players compete in the same group and will play everyother player once. 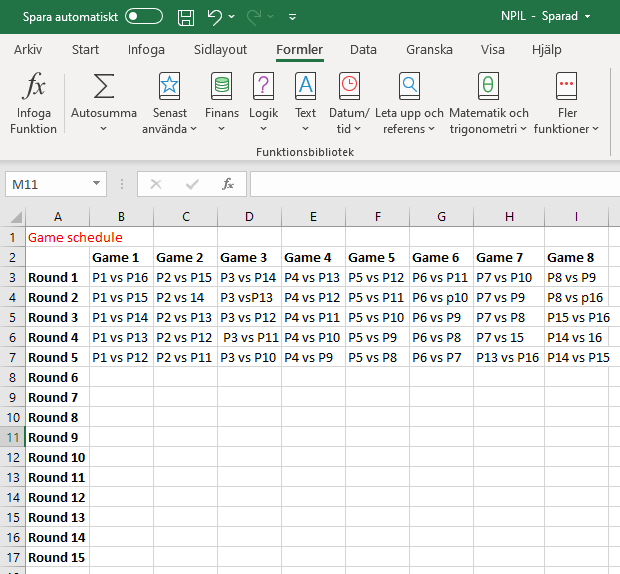 The schedule isn’t finished yet. Just to give you an idea.

Swiss system is a good one you can use for this. Short version is that it sorts it so that you fight players who have performed similarly to you so far in the tournament. You run it for X rounds (usually 5). Some nice features:

@Axson. While I would be happy to have a league system (maybe 6 + 6 in two leagues), I’m still not convinced that we have enough interest and reliability to pull it off. Take your 16 player league example - people would need to stick around for 15 (!) games. If not, all remaining games are counted as auto-loss or previous games get annulled (both pretty much unfair to the previous opponents).

It’s likely much more worthwhile to pursue @panblanco’s KOTH idea. Already gave some thoughts on it above, but I’d add the option for players to notify in advance that they won’t have time to play in a month so games can be planned around that. They’ll lose one position on the ladder (otherwise the current leader can stay on top by stopping to participate). They can also choose their participation to be frozen indefinitely (the new position on the ladder will be remembered for their return) and avoid auto-losses that way - they will be removed for the time being and not be considered for any games.

@Kaine. Interesting idea, we could think about doing a tournament in that way. If I see it correctly, winners and losers will just constantly be grouped together and the one with the maximum wins wins the tournament. We have to avoid having some Swiss Gambit scenario, although I think few players would do it consciously.

Haha, no the interest isn’t overwhelming!

I’m in for the other suggestions if they should realise.

Are there any plans for the tournament in the near future?

I’m in for the other suggestions if th

That sounds interesting, I’ve been in a few team matches, and they were quite good.

What about combining the Swiss System with a following KO round - like a league system with playoffs.

We may could try a Swiss System with following KO round for the next EPIC 1v1 Tournament, @HULK?

E.g. each player plays 4-5 games in that system; the best 4 or 8 players will qualify for playoffs (1 elimination game per playoff round up to a final game of the best 2 players).
Of course we would need enough players who join the tournament AND like the idea.

@panblanco
That‘s a really nice idea! And with 1 game per month the King of the Hill could work pretty good!

Nothing immediate, but when the August tournaments are closer to wrapping up we will have another tournament start in September hopefully.

For the King-of-the-Hill, I’m thinking about a longer sign-up period in September and starting the first round in October.