I’ve had some thoughts for things that would make the game easier to manage, particularly when you get to the late stages of the game. None of these are gameplay changes. Most of these can be done by hand but it’s a massive pain, especially for a game intended to be fairly light touch whenever you sit down to play.

Why? The trade ledger is awesome and it’s such a pain not having it, especially late game where techs trades are bith expensive and frequent

A flag you can put in a planet to prevent building on it. You should be able to check/uncheck from the galaxy screen, quick build and planet page. When checked you will not be able to build on any of the above (until you uncheck it of course) and when using the bulk spend tool it will ignore the planet

Why? It would allow you to ensure you don’t build on threatened or unsuitable locations without having to jump through hoops with names or play memory games, especially while spending thousands

User can edit the funds or the build column and the rest auto updates. A nice extra would be to let you forecast how it would change with different levels of terra (e.g. Drop down to select terra level, but you can’t press “build” if it’s not your current level)

Why? It’s very difficult to work out what you’ll get from any given spend and this would help you understand and plan your spending better. Terra would help you make decisions about when to get the tech from an ally.

Why? Makes it easier to plan your logistics rows and weigh up cost/benefit of different options

Thanks for the notes Kaine,

I actually did a fair amount of work over the holidays and have a few thousand lines of code translated for the new server infrastructure. It might still be a few months away before its ready for play testing, but it will merge the best of Proteus and Triton. The ledger for example.

Given that the 64 games are so popular, I have been thinking more about what we can do to make them more enjoyable. What we might do to improve the formal alliances and even share victories among players who form federations or coalitions. I’m even keen to go back and read those old ideas about taking vassals.

Given that the 64 games are so popular, I have been thinking more about what we can do to make them more enjoyable. What we might do to improve the formal alliances and even share victories among players who form federations or coalitions. I’m even keen to go back and read those old ideas about taking vassals.

I like what I read, big games definitely need some mechanics due to alliances

A very small change that would improve matters is making the ranking reduce by half until you get to 1, rather than cut off at 3rd.

6 is about the size most alliances end up with

Also can we please get some form of map rotation?

I’d be really interested in some way to manage groups of carriers between stars. I usually have major production corridors with carriers launching between stars every tick to get a continuous flow of ships. This results in massive lines of carriers that are super hard to manage, because any change means visiting tens or hundreds of carriers one-by-one.

Of the original list from @Kaine I’ve suggested No.2 to Jay a couple of times in the past - calling the flagged stars ‘Frontier Stars’. It would be a super-useful feature in bigger games for the end-game especially. I’m guessing the coding wouldn’t be that difficult.

I like the idea of different political arrangements in addition to a formal alliance, but the beauty of NP is always its elegance and basic simplicity - so my vote is for not too many fancy additions.

There was a code. way back, that allowed you to auto build only on the stars you selected. you could circle them with your mouse as I recall. I don’t remember who made it. have not even thought of that in years.

I entirely agree with you, plug. I’d add that NP2’s simplicity is deceptive and a lot of noobs struggle to get to grips with the game - adding more complexity will steepen the learning curve.

Making it easier for successful players to manage large empires and win should not be an objective!

reduced tech cost for alliance members. not a lot maybe $5 per level.

One interesting thing I added in an old, not ever published, mod was Sectors. A star was labelled with the shape of the closest homeworld’s player, then on the galaxy screen you can sort by sector. This doesn’t completely solve the issue of upgrading border stars, but was an effort in that direction.

I did some plans on custom sector designation but never got round to it. (and the original mod wasn’t even published in the first place) 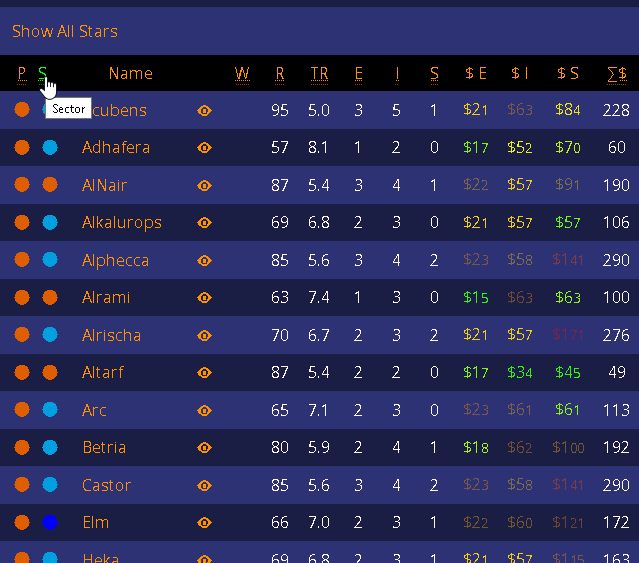