Total income would be nice

maybe total income in this left over space? 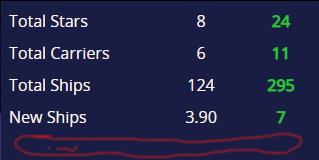 think it would just make things a lot smother.

also total ship production on the intel screen would be great

You might as well give away how much money any player has in a given tick as well. And how far away in hours/points they are from unlocking each lvl of tech. I’m sure that sounds ludicrous when spelt out, haha.

Taking a conservative position, even [New Ships] is TMI since it’s too handy a means to measure resupply strength of a rival.

I’m genuinely curious: why would you think this data should be provided publicly?

Dex you raise a very interesting point about this

Perhaps those could be on/off options when creating a game, the defaults being as the game is right now, but the creator having the option to toggle if you can see other players new ships, total carriers, tech level… etc

This data is already provided publicly… just not in a single neat number. What is @OneBlue and @Skilly146 asking for? Well, total income = 10 * economy + 75 * banking. We can already see a player’s economy level, just go to their home page. We know their banking level, go to their home page and scroll down. So the information is already there, just not summed up into a convenient, single number. And total ship production on the intel screen? There are tools out there that let you record the game state at each tick, and it is easy enough to record that data down so it’s not lost.

So going on your statement:

Taking a conservative position, even [New Ships] is TMI since it’s too handy a means to measure resupply strength of a rival.

In order to remove this statistic, you need to play dark galaxy or remove a feature from the game.

I understand the principle, the less information you have on your opponents, the more intrigue is possible. And as such, less publicly accessible information is better. But a request for the game to keep track of certain data (that it provides) over time in a way that it already does for other data, I think is a perfectly reasonable request.

A Fog of war is natural in any military conflict.

I play this game the hard way, using a solar calculator & spreadsheet formulas.

Many other players create an account to use http://np2stats.dysp.info