idk what happened and how to recreate this but it speaks for itself (or is it some feature that I don’t know about?)
Edit: something I forgot to mention is I don’t have any extensions that effect np. 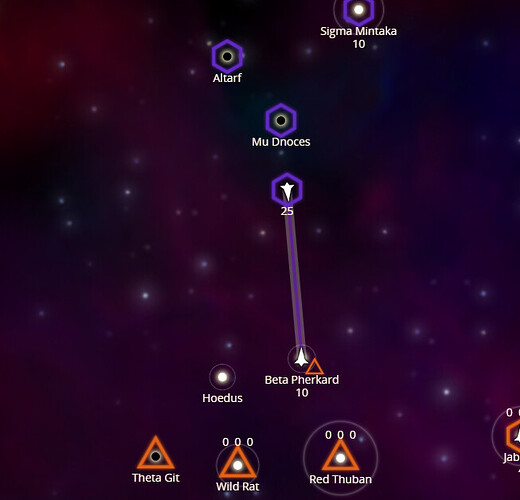 It seems you are in 64 player game Mu Mekbuda , in the southern central branch.

From your screenshot, I am guessing that Orange Triangle Drgert loaded 10 ships on a carrier, then abandoned star Beta Pherkard. That carrier will look normal on the next tick.

Those smaller icons off to the side usually are seen in games that have FA (Formal Alliance) enabled. It is seen here I suppose because the game maybe has a quirk showing Orange Triangle carrier legitimately orbiting an abandoned star.

May I ask how you determine what game a post is about (because I see you doing this in other posts as well.)
is it my username, or the screenshot of the game?

One of my interests is to track some user created games & 64 player games starting up & bookmark them into my browser, and then perhaps occasionally glimpse them until conclusion. So your screenshot showed one unclaimed star Hoedus, so I guessed that your game recently started up, then I look for list of star names to find the constellation of stars.

I do not have time to watch everything though.

Spectating your game, I think Orange Triangle Drgert abandoned star Beta Pherkard to avoid conflict with your carrier arrival. I do not know why you Purple Hex IamAcand QUIT. It seems you have potential to grow your empire, perhaps negotiate some alliances or NAP with two neighbors while capturing the abandoned empire of Orange Star ‘Mr Dr Prof Sir TheSlug’ QUIT & you have 6 unclaimed stars available towards your west to grow your empire & those 6 stars are beyond HR from any other empire.

My bad. lol You are probably not the Purple Hex IamAcand QUIT. You have this screenshot because of scan range from star Jabbah.

Lol so if you see everything then if someone (aka me) pretended to be someone else (fake screenshot/just text waffling) I could get some info about them out of you that I otherwise wouldn’t in the game?
Just wanted to point out a potential problem because like right now you thought I was someone I was not and I wasn’t trying to make you think so. so in later game when scanning range is much bigger…

I often spectate games from the outside, so I do not always have all the in-game information.

It should be standard procedure for me to check scan range first, but I did not do that this time. Your screenshot also shows scan range from star Beta Vega. Also a player’s in-game alias is not required to be the same as their actual True Alias.

Often many gamers take steps to have validating information in the game screenshot, but that is not always the case.

If a screenshot contains more complete information, then it can be more helpful towards troubleshooting problems.

I just found a actual bug on mobile when you press the compass thing to zoom all the way out then zoom back in without it the carriers do not render.