Two choke points. he he

So two different approaches after the first Cycle. @SuperDave didn’t add any Science, whereas I funded Dr. Bruce Banner to create from tech … and true-to-form, he gave me a LOUSY first Exp hit … the HULK smashed all his test tubes!

I’m already thinking that if I were to do it over, I’d take Dave’s approach …

There are a lot of weak planets so we’ll see. I’m just trying to be prepared for a SMASH to hit me at anytime.

That’s alright. After you splat on my defenses I will use my superior ship production to wipe up the situation.

PS, I hope Dave kicks your ass @HULK! Would be very ironic, if not poetic justice, if the experiments is what does it too

@SuperDave did seriously kick my big fat hairy green a**!!!

He went heavy on Industry (never bought a Science) and it turns out that me going heavy Science was a terrible choice. It was clear after just a couple of cycles that I’d get crushed, so I offered to concede.

Plus yes @nick.muzzio, the dice gods were not nice to me - I got a Weapons hit (useless early on) … and I said what the heck, let me try finishing Exp so I get double the points … and got an Exp hit. Which when they are expensive, only gets me a third of the way to the next level and obviously I’d rather have hit just about anything else. There was a double injustice in that @SuperDave did 3x24 ticks of Hyper … and got a Hyper hit!

We used the same starting params as the “2v2” (with ALT account) games, so instead of $2,000, we only had a $1,000 … even though the star count was similar (since 64 stars/player versus 32). Plus only one homestar, so further reduction in Economy.

Both of us would like some parameters that provide different paths to victory … versus just being an Indy-fest. So we just started a new test-game that is 1v1 EPIC and same params, but starting cash is $2,000, home star is 20/20/4 with 50 ships, and you start with only ONE star. I told Dave that assuming he does an “Indy strategy”, I’ll try using Science and hopefully it will make for a reasonably balanced battle with differing approaches.

Having said all that, @SuperDave did defeat me in the final game of the 1v1 Tournament so I declare him the winner of that … plus the very first 1v1 mirror’ed EPIC game - congrats!

P.S. As discussed, I want to see how the new params play out, but if we find something decent, I’ll be firing up another 1v1 tournament soon - chime in if you are interested in playing.

PPS. Here’s a screenshot of the galaxy (click to see big) showing my planned path of conquest! 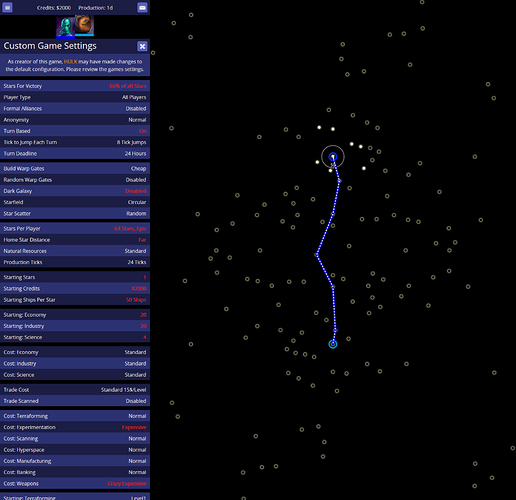 In a Fistful of Dollars (old spaghetti western), one of the bad guys said to Clint Eastwood “when a man with a 45 meets a man with a rifle, the man with the pistol is dead.” Clint gave him the steely eyed glare, proved him wrong, and shot him down. It turns out when a player with science meets a player with massive industry, the same is true. Down went the HULK.

He had a planet lead on me, but I had 150 ships more than him + was out producing him by 4 ships/hour. It’s tough to come back from that.

The plan in the new game is to make the starting parameters a bit more extreme (more $ and just one starting planet) with the idea it makes the game more unpredictable. For future play the stronger strategy player should be able to defeat the weaker one, but when two strong players battle it leads to a lot of uncertainty. That is what makes N.P. fun. Nothing like logging in and wondering what the screen will bring!

Rally as many to get ready for the next tournament!!!

Ditto what @SuperDave said … plus his rifle was powered by Gamma Rays!
Hats off to him for looking at the game params and correctly determining that a pulling out a big can of Industry whoop-a**

Against a lesser player, I would have tried hanging in there hoping for a chance to recover, but against “Sure-Shot @SuperDave”, it was clear that the HULK was going down … HARD!

But he’s got the HULK angry now!

Count me in for the next round

The 2nd game with modified parameters is playing out MUCH better so far as the increased cash is allowing both of us more opportunities and “smooths” out any mistakes. Both of us have made boo-boo’s (happens) but the hope is the size of the EPIC galaxy give you a chance to recover … rather than one mistake (or bad guess) and you are toast.

I told Dave that I would lean toward more Science (and he is doing more Indy) … as we want players to be apply to apply different strategies to win.

Dave commented (and I agree) that it is good to NOT spend all your credits in the first cycle.

Lets see how this plays out as we are basically testing the params for the next tourney game.

I’ve taken over most of the right side of the map and he has almost finished taking over the left side … but the battles continue there and in the middle. It really is a good game and the extra cash significantly improved the play.

Update. After 6 cycles, the two of us are just about even. I think it shows well that the mirror galaxy, epic size and starting parameters we set up for this current match creates a challenge like nothing else N.P has. This isn’t a game of get lucky with an A.I. next to you or get lucky on EXP bonuses or create an alliance that dominates or get ahead on weapons and never come off, etc. This is you vs one other player and it’s a battle!!

Yea, this format is playing very well …although @SuperDave got W4 four ticks before me … so if I had gotten another 72 point Exp hit on Weapons, there would have been a BIG difference in the recent carnage!

In the interests of disclosure and testing the format, I had opted to build some Warp Gates a cycle ago instead of investing in Science. This appears to have cost me dearly … although we’ll see how it plays out. Awesome that we have a game where Warp Gates can come into play … and further echo’s @SuperDave’s comment that this is one heck of a challenge with varying way to play to win.

On further analysis, we agree that the Weapons are still a bit too strong. So we are not sure if Weapons should be fixed (Level3 seems to be a “reasonable” defensive bonus) or as I have proposed to Jay that we have a new Research option called “Exponential” as method of de-tuning Weapons:

I.e. since it is exponential (rather than just a constant increment), it scales much better as you get more Science. So the idea being that when you finish a level, you don’t just leave your research on weapons all the time, but are more inclined to research another tech.

I’m sure in one of the Avenger movies there’s a line that says “whatever you do, don’t poke the Hulk.” I’ve done it twice now with 2 victories. May there be mercy on the next player who battles him as he’s ready to rampage!

Our game was a pleasure. Hulk is a great player and I’m happy to hold my ground with him.

I look forward to the next tournament as we get more players involved. I think the serious turn-based players looking for a challenge will really like the mirror epic-size galaxy with $2000 starting. The only thing left, as Hulk said, is that the science of weapons still seems too valuable. I went 6 cycles without HYP 2, Terra 2, Exp 2 or Scanner 2, but I got to weapons 4 about 4 hours before he did and that made up for it. Since I had a lead on ship count (from my initial thrust on industry), I was able to take out all his ships around me in that 4 hour difference and then advance. That turned the momentum of the whole game quickly. It’d be nice to find a way to make the other sciences more valuable and the chase for weapons less. That way a game can go into more advanced stages…i.e. with warp gates, developing weak planets, longer jumps, sneaky extended scanner range, etc.

I think there’s exponential scaling on research it’s in proteus which wouldn’t be super hard to implement. I like the idea of weapons being locked, either at level 2 or 3

Yea, the challenge is an additional level of Weapons is a BIG step-function that at that exact tick, dramatically alters the power balance. LOL that in my most recent game with @SuperDave, he (correctly) so timed several carrier hits right at that tick with several others en-route that hit 1, 2, and 3 ticks afterwards. I got W4 at 4 ticks … so didn’t help me on defense … but I had (of course!) sent my ships to hit at that point also.

No other tech has such as dramatic impact.

So exponential research can help by delaying this step function (and perhaps make it worthwhile to research other techs), but am wondering if starting Weapons at level4 would be a reasonable reduction in the step function (33% to 25%) but it does end up reducing the defensive bonus.

Or maybe Weapons should just be locked as @TheLastHero is suggesting.
I agree either level2 or 3 is about right.

The dynamics of a 1v1 match are a different than a multi-player galaxy.