Neptune’s Pride has an API that can be used to access scanning data. The API is pretty simple, but entirely undocumented. This post is an attempt to document it. I will edit the main post with details as they emerge, so if I have anything wrong, missed anything out or you have any questions let me know and I’ll work it in. However, this post will assume you have a basic understanding of APIs in general and how to work with them, so a degree of technical knowledge is assumed. The FAQ at the bottom also contain some more general information on what the API can and can’t do if you are worried about sharing your API key with someone.

Code examples in this use Python 3 and the requests library, as this is what I use. If you have code examples in different languages I’ll be happy to add them (except Python 2 because if you still use that you are bad and you should feel bad).

Many thanks particularly to AnnanFay in Discord for as a lot of what I used to get started are the various things they have pinned or posted there.

What does the API do?

The API can be used to access all of the scanning data a player has in any given game, as well as some core public information. It generates only a snapshot in time of the current state of the game when the API is called.

Certain information is available in game but NOT available in the API. Particularly, the API does not give access of any kind to messages, events, or the intelligence pages. Likewise, the API is read-only – you cannot issue orders or send any form of instructions to the game, only access the information.

The main way to use the API is to access your information for analysis or calculation in a more structured form.

The parameters you’ll need are the Game ID and the API Key.

The game ID is the long number at the end of your game URL:

To get the API Key, got to the options section of the game you want to connect to, scroll to the bottom, and hit “Generate key”. The key will be a short 6 character mixed upper and lower case code. 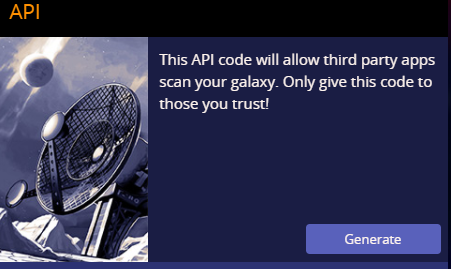 Note that you can only have one active API key. If you generate a new key, and old keys will be deactivated. This is particularly important if you are using another program that uses the key like NP2Stats – make sure you use the same key or you’ll be constantly regenerating between the two connections.

How to Call the API

To call the API you need to issue a POST request to the API end point with three parameters:

The payload will return a single JSON object, which contains a series of embedded JSON objects (in Python: dictionaries). These objects each contain a mixture of parameters and further embedded objects. The top level is a single key “scanning_data” and then within that there are several different object groups.

Below is the basic structure that shows roughly the different sub-objects ( using {} ) and the types of key (using []) present in the object.

the * indicates this part will only be present for the player who owns the key.

The tables below describe the data contained within each JSON object. As objects are semi-structred, keys may not always be present. The Presence column indicates when a key may or may not be present.

Carrier orders are presented as a list of lists. Each order is an ordered a list of 4 parameters with no key. The meaning by position is as follows:

The order type is expressed as an integer with the following lookup:

Tech Keys
The main object contains 7 keys: one for each technology, which holds a further JSON object that contains the information about that technology for the player. Note that not all of the keys match exactly to the technology names we see in the game.

Each technology has the following fields:

The value field is completely bizarre and hard to fathom what it could be. Generally, most technologies are either a low decimal (e.g. 0.65) or low integer (e.g. 2), and then experimentation is always significantly higher (e.g. 240). The value is not consistent between different players, but the technologies which are decimal, small int or larger int follow the same pattern. The value is calculated as value = level * bv + sv - but it isn’t clear what any of these fields do on their own.

War Keys
This object contains a key for each player ID with a single value indicating if currently at war with the owning player. In a game without Permanent Alliance enabled, it is always 3. Unknown for permanent alliance games.

Countdown to War Keys
This object contains a key for each player ID with a single integer value indicated the number of ticks until war begins between the owning player and the player ID. In a game without Permanent Alliance enabled, it is always 3. Unknown for permanent alliance games.

Understanding the Coordinate System
NP uses a pretty standard X/Y coordinate system to pinpoint locations, including stars, fleets, fleet orders etc. All of them use the same X/Y system. However, translating this system to what we see on the map is not that straightforward as the map shows light years and they aren’t the same.

Understanding Time Fields
There are two types of time field in the NP API: ticks and timestamp. Ticks are relatively obvious, and correspond directly to the ticks we see in the game. The timestamp is used in a few different places, particularly to indicate the start and current time in the game settings data. The field gives a value in milliseconds of the time since 1/1/1970.

My connection was working but now it isn’t, why not?

If you generated a new key, any previous keys will be deactivated. This is the most likely reason.

Can I use the API to issue orders?

Can I read events/messages with the API?

What happens if I give someone my API code?

They can access all of your scanning data in any way they see fit. They cannot issue orders, or read events or messages. If you want to revoke their access, generate a new API code and the code you gave them will no longer work.

What information can you get from the API but not from the game?
There are a few pieces of information that the API provides that are not readily available in the game’s normal interace:

Everything else is visible by other means in the game.

Documentation updated with the following:

With thanks to Matti on Discord for the relevant information.

Hey - great information - thanks for sharing

I’ve created a gist with a sample response from the server after the POST. Can be accessed here: https://gist.github.com/oculushut/881af77fbca8fd964c0068b20bd6c93c

All sections updated to contain information from the API when run on a Proteus game.
Visibility amended for several fields to indicate when only present on Triton/Proteus
Player “huid” field description corrected (with thanks to Eutro on Discord for pointing out the mistake)