I thought it would be an interesting option. It would make an added dimension to space warfare.

My thoughts are that stealth would work much like scanning but with half the range. Reducing your enemies scanning directed at you by half a level for every level of stealth you have.

You would be able to turn off stealth with players of your choice. Stealth is automatically on, however you can turn it off on a players home screen with the click of a button.

Effect in Dark Galaxies: For every two levels of stealth it cuts off 1 level of scanning directed toward you. So if you have a star that would normally require your enemy to have scanning level 5 to see but you have stealth 5. It would reduce your enemies scanning directed at you by 2 and a half levels (5 half levels). So in order your enemy to see that star or any carriers traveling within the stealthed area they would need scanning 7 or 8 to see them.

Effect in non-Dark Galaxies: same as above but it would just look like a star out of range of your scanning.

In other words you can only hide for so long. 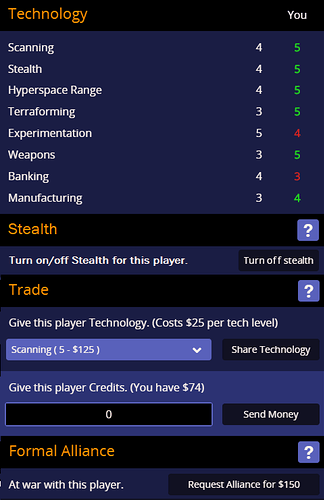 That definitely sounds interesting. So stealth would just reduce an opponents scanning/ability to see ship counts on a star? Or in the case of dark galaxy, see the star at all?

yes, carriers within the range of the stealthed area too.

Maybe instead of tech, you can make it as a separate star buff? Like a warp gate, it could be a “cloaking generator” (or something), and it could do exactly what you said but for one star. idk, just an alternative to cloaking an entire empire, which might be a little too OP.

I actually thought about that for a bit. cloaking an individual star would get to be a bit expensive. how much would it be cloaked? would it stay cloaked if taken? in the long run I thought having it as a tech would make things much easier. don’t think it is overpowered. it just changes priorities for games where you allow stealth. you will have to prioritized both scanning and stealth in these games. Everything is about the big three techs right now. terra, manu, and weapons. this would change things a bit for early and mid game. course in the end game when techs get to be a lot higher it wouldn’t matter anymore and it would still be terra, manufacturing and weapons.

I like this idea. Though I would suggest for it to only hide details and not star locations. In a dark galaxy it should hide all information about the star including the owner, but still reveal that a star exists and allow jumping to that star.

In non-dark galaxies it should reveal the star owner as it already shows the owners of stars outside scanning range.

You would be able to turn off stealth with players of your choice. Stealth is automatically on, however you can turn it off on a players home screen with the click of a button.

I would suggest not allowing toggling Stealth for specific empires. It should be incorporated into the alliance system (which already shares star/ship locations) or having a separate lower cost. Putting things like this behind small cost barriers allows more nuanced gameplay because you have a plausible reason for not doing something. If alliances were free then you could never say “I don’t have the money this cycle but I’ll alliance you next cycle”.

What do you do if you are attacking someone and they ask you to disable stealth? A good gameplay mechanic encourages communication, “I don’t have the credits this cycle”, while free stealth switching forces a player to pretend to be offline.

Has anyone spoken with Jay about changes to NP? I’m not sure any have been made in a long time. I’m not sure his interest goes this way anymore. Plus, any changes have to be approved by Apple and such for iTunes download. It’d be nice though to see some additional features added in to keep the game fresh for everyone.

Would really like a feature that once you see a star in a dark galaxy you can always see it. albeit with no information about it if you are now out of range.

Hey @SuperDave, good to see you active again!
Btw it’s not an app, so no Apple approval needed.

@Karmadrome I remember @HULK telling me that Jay once said deactivating Experimentation as a research method wasn’t just a matter of changing the code a bit, but that it also meant getting it all reviewed through some process. Perhaps I’m mistaken? I just brought it up because it’d be interesting if some programmer was able to take over a bit for Jay (who is probably very busy) on making changes if they were real interested in a side project.