I’ll be interested to see how that plays out. Those two big empty ‘seas’ definitely canalize the terrain. Absent a both bold and lucky move by one of them at the start, If might turn into a creeping economic growth match. I’d be compounding econ as hard as I could given the ease with which one side can be defended on this one.

Didn’t you already establish a tiebreaker rule at the very beginning for this reason? Restarting after 500 ticks would prolong the wait time for others still in the tournament even more.

Yes @Trucriot, I just checked back on the tie-breaker: ‘most stars and then if still even, most ships’. Sounds good to me.

So we finally started our game earlier this day. We‘re currently at Tick 30, very fast pace yet. I have invested a bit more cash in Science during the opening cycle which allowed me to research Terra 2 within 18 Ticks and Bank 2 within rest of the first cycle. Whereas @plug went for early Hyper 2.

I have spent almost all my starting cash during that opening cycle! Never had that before. This map is crazy!!! Can‘t believe it is set with “standard resources”, lol. This will be a tough game and I‘m looking forward to the next turns 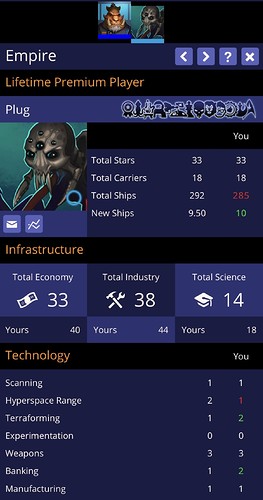 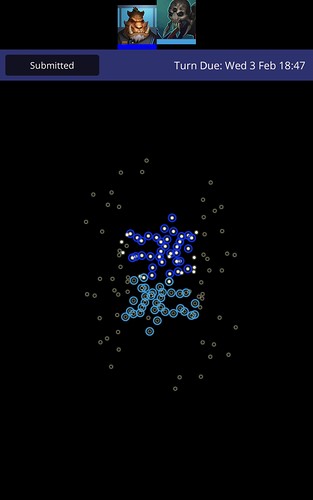 Yes, a quick opening burst of moves. The state of my cash is a military-grade secret!

That‘s fine with me

Thanks for the reminder @Trucriot and @plug about the tie-breaker rule … here’s what I wrote in the OP:
Hopefully we can keep things moving along so people aren’t delayed, but (assuming players start at about the same time), lets try to keep it to one month for any game/round but if everyone else finishes, then you have a week (and at least 2 cycles) to finish. Winner decided by most stars with tiebreaker being most ships. Stalling to win by time is lame (in NP and any sport), so please don’t abuse the time limits.

My goal in writing that was to discourage players from taking the maximum 48 hours to submit repeatably. I get it that RL comes up (which it is doing for me right now - darn!), but if that keeps happening, then maybe playing fast-paced 1v1 tournaments isn’t right for 'ya at the moment.

If both players are submitting on a reasonably timely basis but it ends up getting stalemated, I’m really reluctant to declare a winner if they are tied in stars. Because this is more the fault of a map that just didn’t play out well … even though I spent a LOT of time trying to generate/pick good ones. And reminder that I welcome reviews beforehand.

So … that why I said that a possible “stalemate” rule is after 500 ticks if both sides have exactly the same number of stars, a stalemate can be declared and restart another map. I’m trying to come up with a “fair/neutral” way of handling this to the players aren’t forced into an awkward discussion - @Solfyre and @Trucriot were able to graciously handle their situation.

And yes, I realize that this delays the whole tournament, but there is no “perfect” answer.

@DarkDragonwing and (military-grade secret - LOL!) @plug … and everyone else.

I’ve been wondering if bumping the starting cash from $2,000 to $2,500 would be beneficial. I think (?) this provide more options for different strategies to develop and should also speed up the pace of the game as development happens sooner. Maybe it should be $3,000.

If both players are submitting on a reasonably timely basis but it ends up getting stalemated, I’m really reluctant to declare a winner if they are tied in stars. Because this is more the fault of a map that just didn’t play out well …

I get that sentiment, but I do think that even on a “stalemate-y” map (within reason, which you ensure) players would need to be on a pretty similar level (within that game) to actually stalemate it. Officially calling it a draw when both have the same number of stars after a long time seems fair to me - and the tiebreaker would only decide who moves on in the tournament.

I agree. I paid some attention to it after you posted the idea in the LLL thread and think the additional tactical freedom is worth having. Preferring 2.5k over 3k - just a feeling, probably to not make an overly aggressive change to the settings and gameplay.

I don’t know about the money thing. For sure, I wish I had more cash and there are always lots of ways I’d like to spend the cash. But I do think there is a BIG element of saving money for what you REALLY need. An industry here, a couple extra science there or even an early warp gate network. Those tough decisions are what makes these 1v1s so interesting and exciting. Every choice has a decently sized repercussion. So my vote would be to stay at 2000.

I here 'ya @Solfyre that there has to be some financial austerity … however, I think having that little extra cash early on will open up the game play a bit more and allow a more concentrated Indy or Science (or even Warp Gates) as additional strategies to pursue.

The other thing it does is it should allow further development of the Stars … so it becomes less of a “Pump Ships from the Core Star” game.

Maybe @Trucriot you could propose this in your LLL games and see if anyone is willing to try it and report back how it works. I agree lets just bump to $2,500 before $3,000.

P.S. Along those lines, it would be really cool if we could somehow do TWO Core Stars (split geographically) and run as a single player. We’ve actually tried some “1v1” with 4 player games (have to use an Alt account) but that is cumbersome.

My vote would be with @Solfyre and leave the cash at $2,000. Good use of the initial endowment is one of the key things with this type of game, and although upping the cash still means you have to make good decisions, I think having cash tight at the second and third cycles in particular is a really important part of the game.

But happy to go with whatever’s decided - no problem. And obviously cash reserves remain a military-grade secret at all times…!

@HULK you mentioned : “The other thing it does is it should allow further development of the Stars … so it becomes less of a “Pump Ships from the Core Star” game.” It seems like choosing a homestar with 20 industry is always going to make it a pumping game. If that is a bad thing, then we should reduce its industry? Or, like you said, add more money the make the 20 industry less by comparison. That seems like a band-aid fix though.

I’m not trying to nit-pick, just trying to understand your standpoint. I’m relatively new to the 1v1 format, so everything is still new and exciting to me. I also know you guys have been playing these tournaments for a long time and are looking at it from a different angle than @plug and I.

I’m not sure if there is a long story behind the evolution of the 1v1 as we know it. What went into deciding the current settings?

I hear 'ya that one approach would be reducing the homestar Industry … but then that would result in less Warp Gate development early on … and I think you want to encourage that as a possible option … albeit expensive one.

The 1v1 params have gone through many iterations - LOL try doing a 1v1 game with the default game params - whoever makes the first good move (and gets Weapons first) WINS! Along those lines, we tried making Weapons Crazy Expensive … but saw some games literally decided by ONE ticks since both players would launch massive assaults at they completed W4 … so that didn’t seem like much fun.

Making Science Cheap and Banking Cheap is an attempt to balance out just a pure Indy-Fest … ditto making Manu expensive.

Making 64 stars and FAR is an attempt to make the game forgiving (if you make a mistake) and open up multiple battle fronts.

I don’t claim that the current params are “perfect/right” … but they seem to result in fairly good game play. But I’m always interested in improving things and open to new ideas … so that’s why I’m suggesting a little more cash at the start might provide an incremental help.

Thanks for the quick synopsis @HULK! I appreciate always trying to make it better. I think I find games that have a slower build up to be more fun as every purchase is important and feels exciting. Increasing money may very well make for a “better” game in some way. Just not my preference.

Finally made the winning strike on my game against @Dr_Gaming and took the victory after 300 Ticks!

In my game against @plug I managed to take a minor lead in stars (67 - 64) and stats on Tick 186, after I went all-in on a predicted hidden warp gate a few turns ago and took down his home star Economy, which boosted mine a lot. That also allowed me to crash some of his ships in some serious carnage!

But the war is not won yet 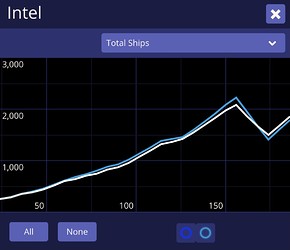 It was one of the finest ‘blind’ moves I’ve ever seen in NP @DarkDragonwing - I shall fight on, but whatever happens next I feel like you deserve high accolades for such a bold and effective strike.

Congrats to @DarkDragonwing in finally defeating @Dr_Gaming and sounds like you made a HULK SMASH move against @plug by taking out the Economy on his Home Star - tough to recover from, but would be a legendary comeback if you pull it off!

@HULK, I guess that was a real HULK SMASH move. @plug even renamed his home star to confuse me, twice! That was pretty cool, and for a second I was wondering if I was heading correctly, haha.

Now, he outplayed me with an unexpected warp gate move where he is heading an undefended star on my side, of which I thought I would be able to defend right in time if needed… yep, I was wrong

Been thinking for A LONG TIME what to do against it, was a very smart play of him!

I’ve just conceded to @DarkDragonwing in my quarter-final match, so he’s through to play Solfyre. A great game, and a worthy winner.