Robots build Science, but don't appear to complete anything if Exp=0

I recently posted about a 1v6 Challenge … and in my initial testing, I tried setting Experimentation to ZERO and non-researchable … since some “lucky” Weapons hit can help you greatly. However, when I played a game, the Robots built Science, but never completed any tech - what the heck?!?

An example can be seen at this paused game. My Science isn’t that much different than the Robots and I just stayed on Weapons … but after 144 ticks, I’m up to Level 5 … the Robots haven’t done anything - how come there isn’t any change in their tech?!?

LOL the Robots keep launching attacks against me, but don’t stand a chance with just Weapons one!

Semi-related might be this bug report about “If NO Tech in game, AI should not build Science” 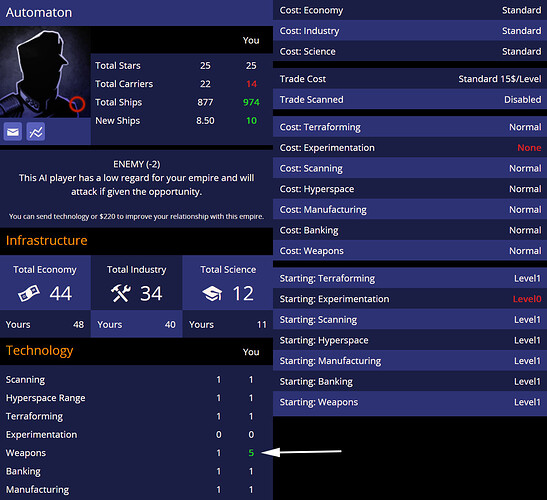 Hulk being able to set it wouldn’t mean much. We know from the hyper range bug that some of the restrictions players see don’t apply to AI. There’s a good bet what’s happening is decent exactly that - they are camping exp and never hit a level

I confirmed (in all games) that if a technology is locked, a “regular” player can NOT research it.

Based on the two examples below, it looks like if ANY technology is set to non-researchable, the Robot gets “stuck” and their Science does nothing. However, they do get Exp Bonuses at the Cycle.

Game with Exp Locked but set to Level 1 - Robots get 72 points each cycle. 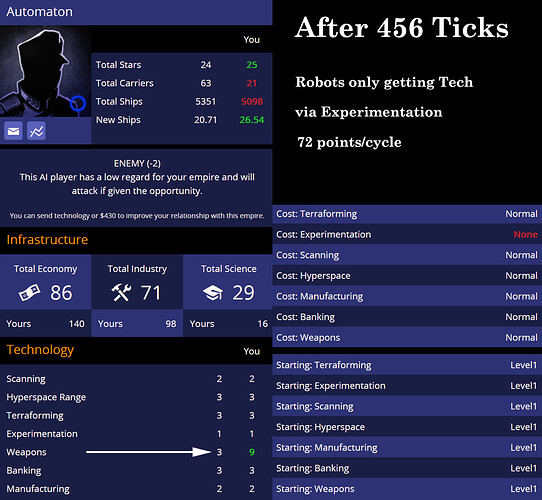 Game with Hyper locked at level 2 - Robots only get Exp Bonus at the Cycle … but increases because eventually, someone gets a couple of hits and Exp advances to next level. 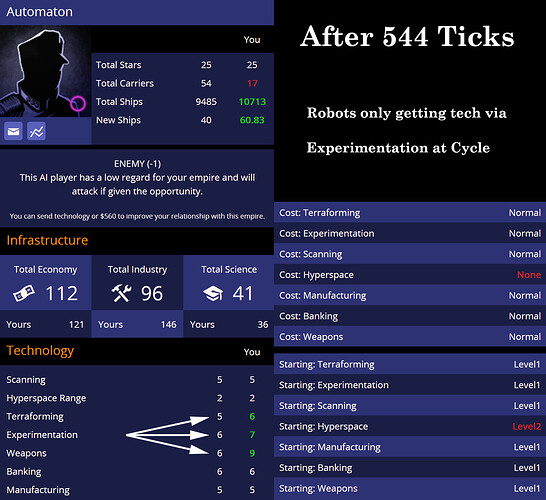 FYI that I did set Starting Cash to $3,000 … since that shows the effect of Science/Research faster … plus gives me a bit of a chance get ahead in Weapons to withstand the attacks from all sides. Although once again, Orange was the most aggressive Robot in both of those games!

are there different AI “types?” orange being the most aggressive makes me ask.
maybe by color or randomly picked etc… if that’s something we know or can figure out

For comparison, here’s a screenshot from this game with normal settings (except $3,000 starting cash) where I did NOT trade with the Robots … but they, of course, trade with each other. So they easily pull ahead in tech … and this is even with me getting a head-start on Science early-on.

While I assume that the AI’s all use the same algorithm, LOL that once again, Orange is the aggressive Robot and has made it into my inner circle.

Has there been any strategy to which AI you go after first? After both your games @HULK , might you try to take out orange first next time?

I will admit that when deciding which Robot to attack first, I think about going after Orange first since they seem to have it out for the Jolly Green Giant!