1v6: How quickly can you defeat SIX Robots?

Some may remember that a while ago (LOL way back in 2016 per links here - here - here), I created some “Twin-Ring cluster” maps where you were surrounded by Robots and had to fight your way to victory. While doable, it’s not easy when it is 1v7 … or 1v24 … or 1v32.

@Belson recently commented in this 1vMANY thread that “Maybe this could be a challenge of some kind” … but that thread was with a random scatter of stars, so not repeatable.

So for grins, I tried the 1v6 cluster map again - was curious to see how quickly I could defeat the Robots and capture 66% of the stars. I did it in 368 ticks … but made some mistakes … so figured I’d try another speed run. It took me about six hours to play … but I was able to win in 296 ticks - I’ll post screenshots of that in the next post.

If you want to try to “set a record”, here’s how to create the game with the modifications to the defaults.

Note: There is some sort of bug such that if Expimentation is set to ZERO and non-researchable, the Robots end up not complete ANY tech - see thread here.

You are allowed to do “anything” - i.e. trade tech/cash with the Robots, create Warp Gates, etc.

It’s a kinda goofy playing against the Robots … but if you want a fast-paced game, you never have to wait for them to submit!

My strategy is to focus on Science/Weapons, overwhelm one Robot at a time and then move to the next one, and watch your star count early on, since once you take the lead, they all start attacking you plus you can no longer tech trade with them.

There may be “better” ways to play - give it a shot and let is know along with posting your results! 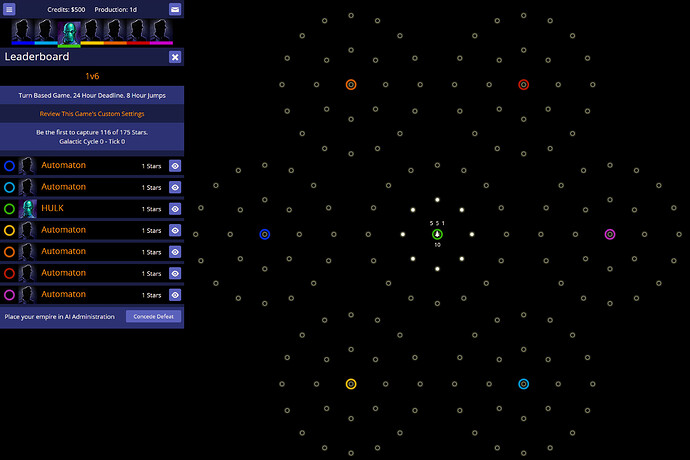 Here’s composite screenshots from the end of my 1v6 game. Note that the game doesn’t display the end tick, so I also included the Intel Chart (which FYI is every 6 versus 8 ticks) and the Event Log.

My first Exp hit was Scan (great … NOT!), then got Exp (that’s better), and then got a Weapons hit (HULK SMASH!) so that helped. I did make a few mistakes (forgot to trade for Terra3, forgot to drop ships a few times, etc.) but I don’t think I could have finished much faster … although made a boo-boo at the end so was one-star short at Tick 288 - D’OH!

Here’s a link to the game which will roll off soon. 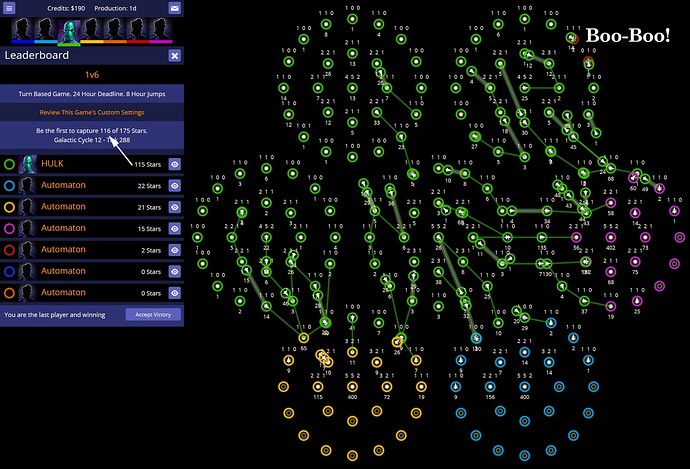 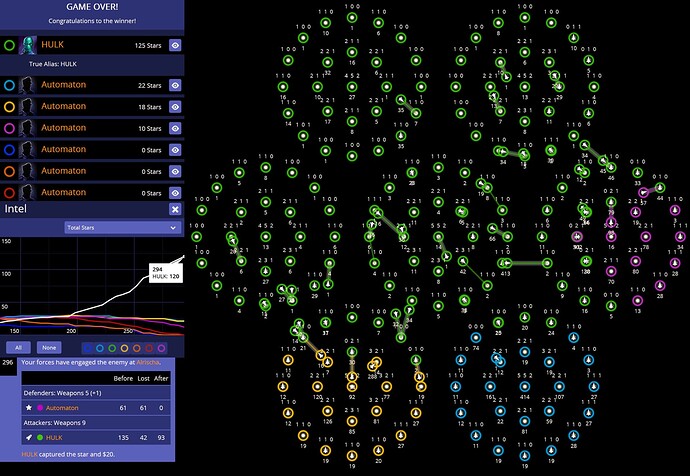 If you want to try to “set a record”, here’s how to create the game with the modifications to the defaults.

And don’t forget to set the Star Scatter to Twin Rings!

Ooops … thanks for the addition @MalcolmReynolds - I’ve corrected this on the OP.

It sounds like you are giving it a go - report back on how it goes and I’ll add your time to the OP.

Am i allowed to change tech settings or simply those on the list?

I’m confused by the question. The OP shows the game settings … which are very close to the default settings - just make the changes listed.

This way, you are playing the “same/similar” game as everyone else.

I didn’t have much time to spend on this challenge at the moment, so my attempts were very shoot-from-the-hip. I tried a few different strategies briefly, to gauge what would work best, then deleted those first three attempts before completion. I completed attempt # 4, reaching the goal (+1) on tick 385, but the turn ended on tick 392, at which time I held 120 stars (goal +4).

There was definitely a lot of room for improvement of my efficiency in terms of carrier orders, so I’m planning to give this challenge “the ol’ college try” when I have more spare time. I think I settled on a strong enough starting strategy in terms of star captures and building, but I might try to be a little more aggressive next time about how soon I start taking on the two AI at the same time. In attempt #3 I was too hasty about pulling that trigger (after defeating only one) and it slowed me down too much, so in (this) attempt # 4 I think I overcompensated by being too careful about it, but I still suspect it’s more efficient to take on the last two at the same time, which shouldn’t be too difficult with a large weapons advantage.

In all cases I entirely avoided war or enmity with 2 of the AI throughout the game (EDIT: until the very end of this one when I knew it wouldn’t matter), and tried progressively harder to avoid taking the top spot on the leaderboard until I was already well at war with the other four, to minimize bribe costs.

In the beginning I focus on ECO/IND and don’t bother much with SCI, maybe 3-4 max, just to knock out a level of exp early, which helps speed up other tech advances and makes it cheaper to trade than sending cash each time. Because the AI are sluggish to develop, a heavy ECO advantage in the first few cycles makes them easy to outclass, and then off course many ships will be needed to beat them all flying solo, so early IND development seems crucial. With SCI, I don’t see the sense in boosting it until well ahead of the others in resources, income and ships, especially because the AI tend to simply keep pace in SCI and aren’t motivated to build it unless a player does. By waiting to push hard on SCI it is easier to leave them in the dust and gain a strong weapons advantage. In attempt # 4 my finishing level was 11, and the best AI had 6. Since tick ~200 I had about 2x the level of whatever foe I was fighting.

Thanks for the info and post @MalcolmReynolds - I’ve updated the OP with your time of 385 ticks. If the truth be known, my first try a week ago came in at 369 ticks … but yea, I got more aggressive the 2nd time around and got it below 300, so I hope you’ll have time to give it another shot.

Excellent writeup on your strategy which is similar to mine … except you opted to go easy on Science early on (letting the AI develop it for 'ya) while you crank up Economy and Industry - I might try that!

BTW, interesting comment that “the AI tend to simply keep pace in SCI and aren’t motivated to build it unless a player does” - do you think that the AI will more favorably research a tech that others are ahead in?

I haven’t noticed a pattern in what the AI choose to research, and of course it is difficult to tell which one completed a particular tech, considering they trade rather freely, but I suspect they tend to complete whatever will take the least amount of time, which means the randomness of experimental bonuses guides them. What is clear is that they will not trade with another AI at the top of the leaderboard, thus in a game of this design the AI that maintains a lead in star count is likely to fall behind in techs overall.

I agree with your assessment @MalcolmReynolds … but I’m not sure that the AI will bias researching a tech that someone else is way ahead which is what I thought you implied.

I haven’t seen this in the 1v6’s when I race ahead in Weapons - end result seems to be balanced since (as you point out), the AI finishes what can be done soonest.

As an aside, I tried the same game settings except with cash $3,000. Makes for a wilder game, but the net results wasn’t that much different - see forum thread here.