The last 1v1 tournament was in April and while it’s still (!) finishing, it’s (finally) down to the last three player. Players seem interesting in starting another one, so it’s time for some more mano-mano carnage!

UPDATE: Here’s the tournament brackets that will be updated as play progresses.
The Tournament concluded on February 28th, 2021 - Congrats to @Solfyre 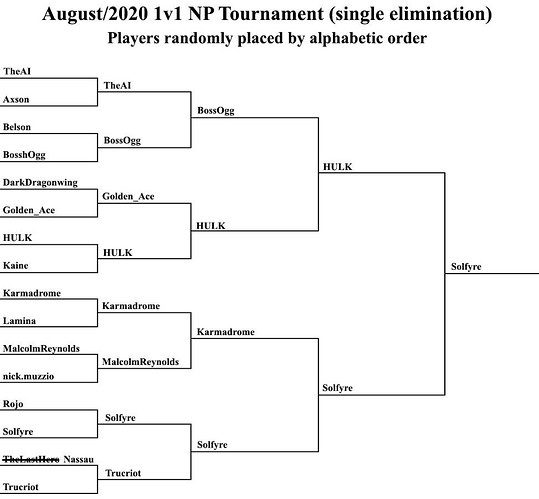 Similar setup as before with the following mods from default params:
Weapons start at Level3 and are LOCKED (whoever gets W4 first has a too-big-of advantage)
Experimentation is LOCKED at Level1 and Manufacturing is Expensive to Research
Per excellent suggestions from @Solfyre, Banking will be Cheap.
Cheap Science (this seems to work well and provide some balance to an Indy-fest)
EPIC (64 stars/player) Galaxy with Far Distances
HomeStar is 20/20/4 rather than 5/5/1
Starting Cash is $2,000 (don’t spend it all at once, but lots of carriers to expand is recommended)
You start with ONE star that has 100 ships
The Map is MIRRORED … so you each have IDENTICAL starting positions.
Real-time games favor those who are willing to forgo sleep, so the play is turn-based SIX ticks/turn … although if Jay enables smaller ticks per this thread, we may try 3 ticks/turn.

Since this is an EPIC map, it will take a while to play out. So please do NOT sign up if you can’t commit to AT LEAST a move/day … ideally a couple/day to keep things moving along.

Note that you are allowed 48 hours to submit which is to take care of the (hopefully very rare) situation where something comes up in RL and you can’t submit in a day. Since it is 1v1, there is no diplomacy (except razzing your opponent!) and with turn-based, if you are the 2nd person to submit (and advance the turn), then please try to make your subsequent moves and hit that SUBMIT button!

Note that you do NOT need to be a premium NP player to participate … but if you have a “free” account, you are limited to 2 games at a time … so please don’t sign up for the 1v1 tournament if you can’t keep an open slot. Or better yet, consider signing up for premium and toss Jay a few bucks for a great game!

Hopefully we can keep things moving along so people aren’t delayed, but (assuming players start at about the same time), lets try to keep it to one month for any game/round but if everyone else finishes, then you have a week (and at least 2 cycles) to finish. Winner decided by most stars with tiebreaker being most ships. Stalling to win by time is lame (in NP and any sport), so please don’t abuse the time limits. Most of the tournament games finished in 2 weeks, so hopefully we can move along at a similar pace. I just don’t want people to have to wait around too long and lose interest.

If “something” comes up, the Tournament Director (that would be the Jolly Green Giant aka the Rule-Meister!) will attempt to make the fairest decision that benefits the most people. Sorry for all the fine-print legalese!

Please reply here in this thread if you’d like to join in on the carnage (and can commit to keep the games moving along) and I’ll setup the tournament!

Subs: @Chumbles - @kinghuang - @Dysp - @SuperDave - @panblanco
There’s a decent chance someone will drop … so be ready!**

Count me in again @HULK

Original post updated - LOL @Chumbles on the “Unwisely, in”

More carnage for me, please and thank you.

Glad to hear it. I’ve had about enough of your wise cracks.

if everyone else finishes, then you have a week (and at least 2 cycles) to finish. Winner decided by most stars with tiebreaker being most ships.

Ooooh, so this time there is a possibility of sudden death play, if the tourney is waiting on only one match to complete! Exciting.

The “sudden death play” is an attempt to move things along when games take too long and that holds up the tournament for everyone … especially in the early rounds. I really don’t want to have to be “tough” and invoke that rule.

Right now in the April/2020 tournament, the one match that is waiting to finish is @MalcolmReynolds versus @nick.muzzio … but since I’m the only player left (waiting to play the winner), it’s not that big of deal.

Me too please, I’ll join!

I want to join.

sign me up too, will try to hurry up the april one

The AI forgot his forum password sigh but he wants in as well.

Add everyone who has RSVP’d so far … including “AI” provisionally - please have him reset his password (or whatever) so his forum login is working.

NOTE: We have 13/14 signed up … and to make the tournament draw simple, I’m going to cap it at 16 entries. So if you RSVP after that, you’ll be on the “sub” list … but decent chance someone will drop which happened in last tournament of just 8 … so be ready!